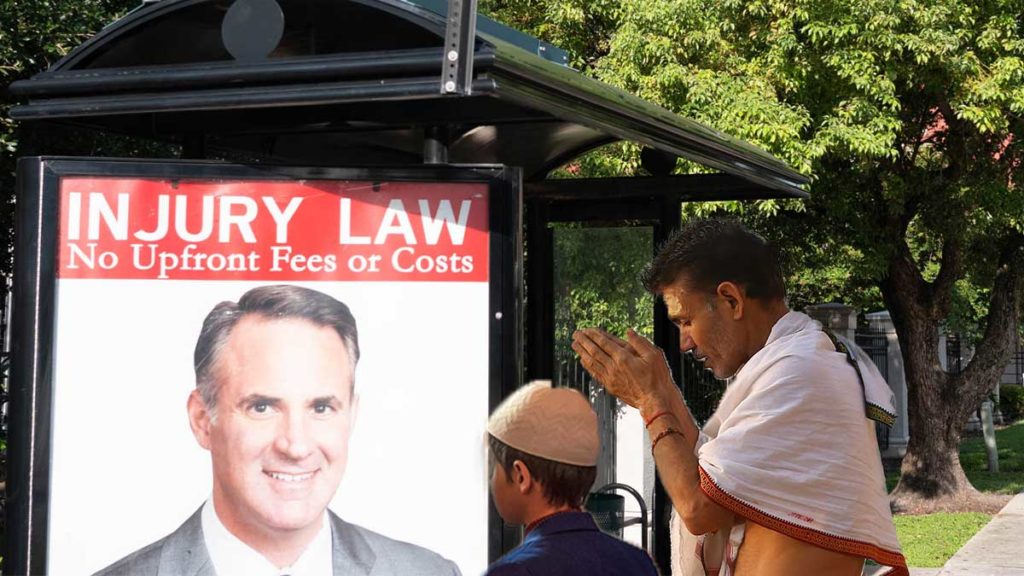 “Look how he smiles down upon us with benevolence and love,” says follower Prudence Holeflower, dancing uninhibitedly at the base of a Dennis Hernandez billboard located at the intersection of Florida Avenue and Kay Street, facing eastbound traffic on 275. “I would kill and die for The Leader and I patiently wait for His instructions to do either or both,” she said, as she swirled off into a surging mob.

When asked for comment, Dennis Hernandez said, “As a Harvard graduate, I can tell you this has nothing to do with me. They’re worshipping my billboards, not me.” When I asked him what being a Harvard graduate has to do with anything, he replied, “Sorry, but as a graduate of Harvard I’m obligated to mention as often as possible that I’m a Harvard graduate. But I’m not profiting from this nonsense in any way whatsoever. In fact, the city keeps sending me notices saying that I need to clean up the chicken bones these freaks leave behind after their stupid gatherings. I’m a Harvard graduate!”

The followers, who call themselves ‘Boardies’, were now participating in an elaborate ritual involving chicken bones, some incomprehensible chanting, nudity and even more frantic dancing.

Without being asked, another follower approached me and explained. “Dennis Hernandez is a mere mortal. He is unworthy of praise and worship although a fine personal injury attorney and a Harvard graduate. But he too will be washed away in a river of blood when The Chosen One finally rips His iron feet from the asphalt beneath and storms through Tampa, laying waste to the non-believers, leaving only us, The Billboard Children, to live and flourish in the garden of ruin left behind.”

I asked the unnamed cultist, “so you guys are waiting for a billboard to come to life and kill everyone except you guys. Great. What can I do about this?”

He replied, “Nothing. You are among The Doomed. But if you somehow survive, which you won’t, give Dennis Hernandez a call. He’s a Harvard graduate and a heck of a personal injury attorney.”