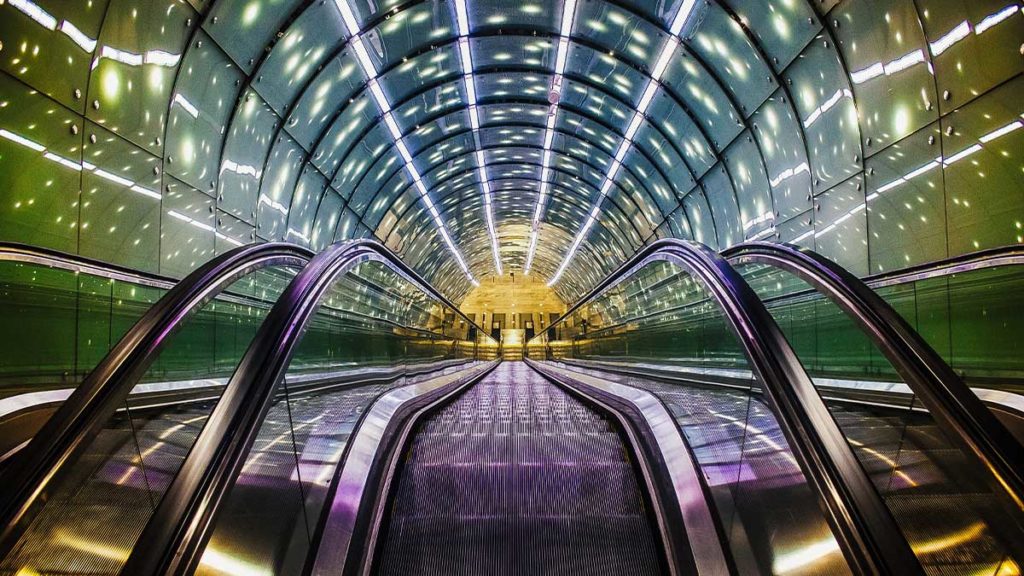 Just in time for the arrival of vacationing tourists from up north, the Tampa Bay Area has a brand new amusement attraction; “Escalation: The Wonder Of Escalation!” at Clearwater’s Countryside Mall.

Located between Zales Jewelers and the Tampa Bay Skating Academy, the attraction consists of two escalators, one that goes up from the ground level to the second floor and one that does the opposite.

Local resident Gary Worsch is the owner and operator and he talked to me at the mall while wearing a navy blue polo shirt with yellow stars, comets and Saturns on it. “I guess the mall is having a bit of a rough time financially so they sold me these escalators for $15 each! In fact, it was that guy right there!” He says, pointing to a man sweeping the floor who suddenly walked away very quickly when he realized people were talking about him. Worsch continued, “Far be it from me to not take advantage of a great deal when it comes my way. Aren’t they magnificent?” I asked if he had plans to move them to another site and he said, “Well no, I can’t. They still need them so they have to stay here in the mall. That was part of the deal. But they’re mine. I just can’t do whatever I want with them.”

What he can, and plans to do with them is share his love of escalators with the public. “Think about it”, he says. “You step on to a step that takes you up, or down, several steps without you having to take another step! That’s the closest thing to magic that exists in our world, if you ask me.” Worsch hopes people do ask him questions. “My plan is to take small tour groups of six or so, first up and then back down, for $5 a head. During the tour, I’ll give them fun facts. Like that escalator speeds vary from about 90 feet per minute to 180 feet per minute and an escalator moving 145 feet per minute can carry more than 10,000 people an hour, many more people than a standard elevator. That’s about how fast these babies zip along”, he says while chuckling and patting the down escalator’s hand rail like a barrel racer might pat his horse. “Also, that there’s no name for a down escalator; it’s still called an escalator, even though it doesn’t escalate”, he says before stopping to think as a worried look came over his face. “I think I really need a lot more fun facts.”

I ask him what about mall customers who don’t want to take a tour, who just want to travel between the two levels to shop at different stores without paying to ride his escalators.  “They’re allowed to do that. Anybody can ride, any time they want, for free. That’s also part of my deal with the mall”, he says before adding, “I did not sign a very good deal with the mall.”

← Everglades to become waterparkRays playoffs to be held in Montreal →