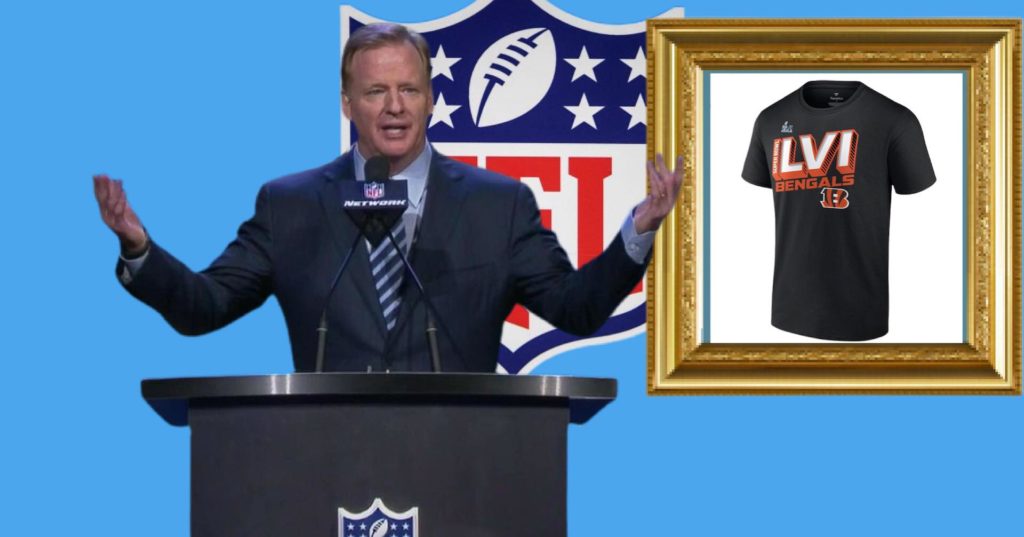 The National Football League (NFL) has announced that they will be offering Super Bowl Champion merchandise pre-printed with the identities of losing teams as non-fungible tokens (NFTs), starting with t-shirts proclaiming the Cincinnati Bengals as winners of Super Bowl LVI.

“Yeah, we used to send that stuff off to starving people in Africa, but then we realized that we were losing money,” said NFL Commissioner Roger Goodell, speaking at a luncheon held at the Krystal on Hillsborough in Tampa yesterday. “I’m not sure if you were aware, but starving people in Africa is not exactly a market that will expand your profit margin.”

Championship commemorative merchandise like hats and t-shirts is produced in advance with versions of both teams winning, in order to be available for distribution as soon as the game ends, regardless of who actually wins. As a result, half of it is automatically irrelevant and previously perceived to have no value.

“Now with crypto currency and NFT’s, things with no true discernible value are worth lots of money,” said Goodell. “What’s more non-fungible than a t-shirt commemorating something that didn’t happen?”

“In this case, ‘NFT’ stands for ‘No Football Trophy’,” he added.

“What it comes down to is that there’s nothing we hate more than failing to capitalize on every possible source of revenue available to us,” he said. “Well, that and acknowledging that our players are just expendable pieces of a money machine. Oh, and that Kaepernick is right about us having a pretty serious systemic racism problem. But those last two things tie into the first one.”