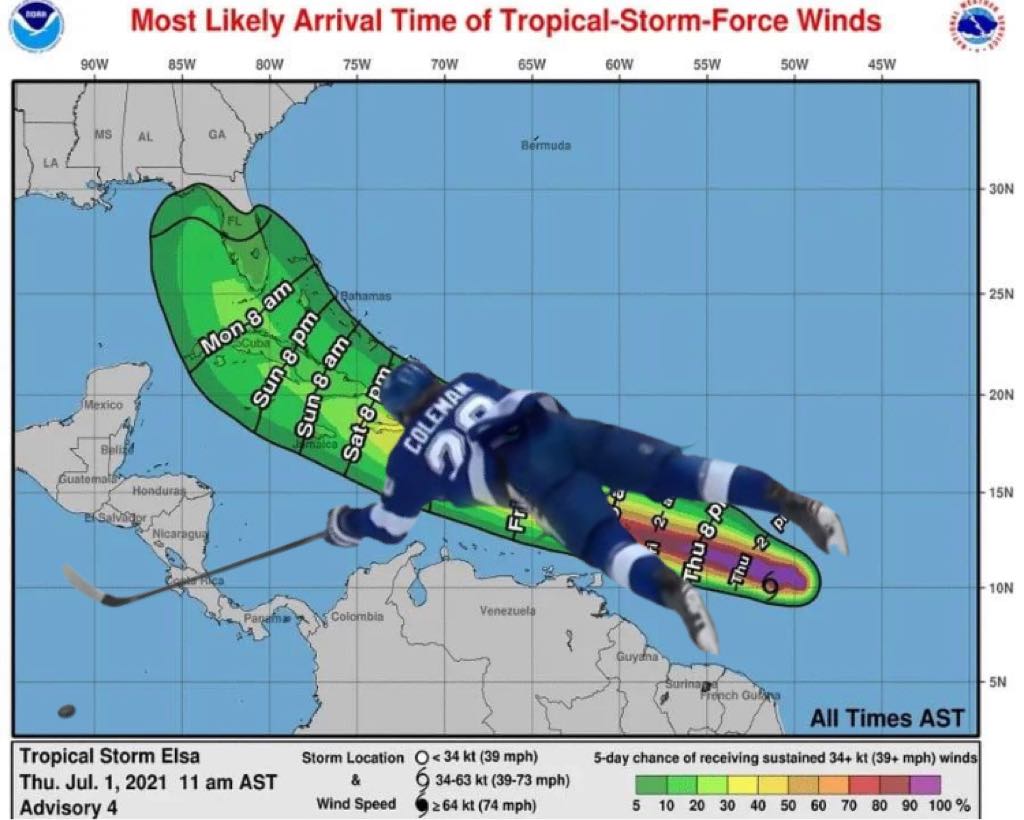 The National Oceanic and Atmospheric Administration (NOAA), the government’s primary weather authority, announced that they are adapting Tampa Bay Lightning forward Blake Coleman to serve as the new means of illustrating the track of tropical systems that threaten U.S. coastlines.

“More than anything else, we want to keep people safe”, said NOAA spokesperson Angela Feltflicker. “Not to say we’re ‘dumbing it down’ but we recognize that there are probably more relatable ways to convey information to the public than something that might be a little too… science-y.”

“Yeah, miss me with that science-y bullshit. I’ve never understood that whole, ‘Cone of Uncertainty’ thing. Are you in danger if you’re in the cone? Are you completely safe if you’re not? Shouldn’t it look more like a cone? It don’t look like no cone to me. Do I need water and canned goods or not? I’ve lived in Florida for 33 years and I still don’t know what to do”, said Dan Gwince of Tampa. “But after watching the game on Wednesday I know exactly what’s gonna happen.”

“Tropical Storm Elsa will start the play by forcing a turnover in the neutral zone. Prevailing winds will collect the low barometric pressure and pass it along to warm water, which will avoid a poke check attempt to gain the offensive zone. It will then be passed back across to Elsa, outreaching a backcheck and diving in to punch it in over the right shoulder of the Panhandle, resulting in landfall somewhere between Apalachicola and Steinhatchee. Classic Blake Coleman”, said Gwince. “Of course, since the eye of the storm isn’t clearly organized yet, the actual path and strength are yet to be determined, and will largely depend on what Blake Coleman does this weekend in Montreal. But I got it. I’ll get some water and canned goods and keep an eye on the updates.”