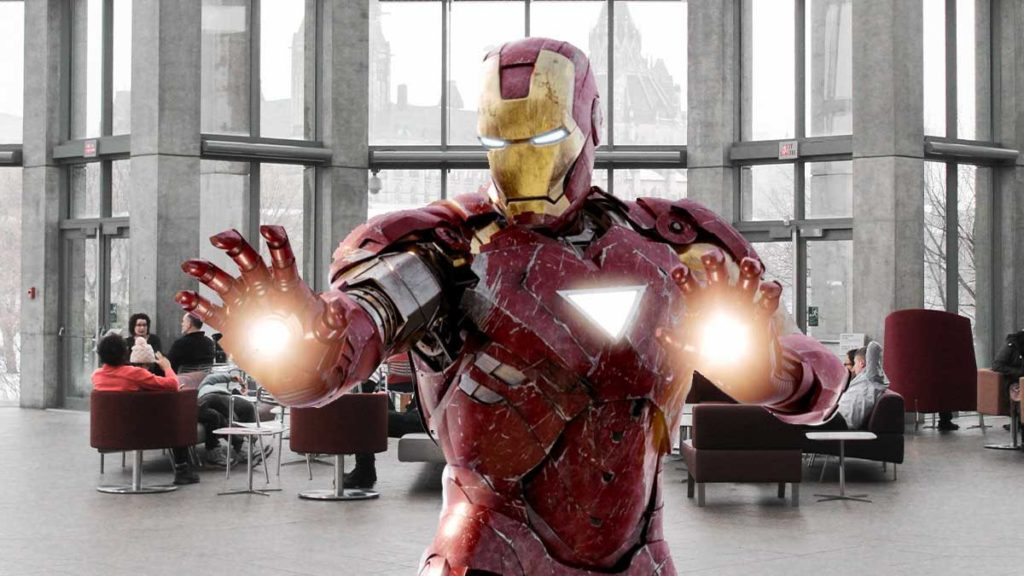 Larry Gavelle, a clerk of some sort was hurled through a window on the 38th floor of the 100 North Tampa Building by a disgruntled co-worker, resulting in his death by colliding with Ashley Drive at high speed.

The murderer, who confessed immediately, is Gavelle’s co-worker Stephen Klurrzh. “Yeah, I killed him. I just wish I’d done it sooner. Enough is enough!”, said Klurrzh as he was led away in handcuffs, wearing an elaborate Iron Man costume. The cops let me hop in the squad car to question him on his ride to central booking, because that’s the kind of thing they totally allow in articles like this.

Both men were employees at Donkey Time Associates, Inc., a business company. “I worked with Larry for eight years,” said Klurrzh, staring out the window at the Hillsborough River as the squad car started to pull away. “Every year, we have an office Halloween party and every year, Larry would ruin it with some stupid, lazy costume. The first three years, he wore an orange t-shirt that said ‘THIS IS MY COSTUME’. The next year he came in normal work clothes and ate a sandwich as ‘GUY EATING A SANDWICH’. Then it was ‘GUY EATING SOUP’. After that, the orange t-shirt made a brief comeback. Last year, he didn’t even bring food and was ‘GUY WHO RIDES A BIKE AFTER WORK SOMETIMES’. Today, he showed up with a baseball cap and said he was ‘GUY WHO BOO’ED TRUMP AT THE WORLD SERIES’ and I snapped. It wasn’t even a Washington Nationals cap. It was a Rays cap.”

As if to illustrate the disparity between his costume and Gavelle’s, the Iron Man suit began beeping and steam started to billow from the bottom of the metal boots.

“I snapped. I couldn’t take it anymore. I threw him out of a window and he plummeted to his death 500 feet below.” Klurrzh said before the squad car ran over Gavelle’s body because nobody had shown up to gather the remains and our driver wasn’t paying attention.

“Shit,” said the driver, to which his partner in the passenger seat replied, “Get yer head outta yer ass, rookie”. Klurrzh and I both stifled giggles.

Klurrzh continued, “It wasn’t really so much that the costumes were so uninspired; it’s that everyone else in the office thought they were actually clever. Oh, how they would laugh, ‘let’s see what that rascal Larry has up his sleeve this year. Ha ha ha.’ Well, nobody is laughing now. Especially that bitch Donna who refused to go out with me but thought Larry was so funny.” He paused and added, “And Larry of course. He’s definitely not laughing.”

Klurrzh said the root of the issue is that it’s a matter of principle. “The grand prize for the costume contest winner is a $20 gift card to Outback, which, big deal, right? But still.” That’s when he activated his fully functional Iron Man suit, using his repulsors to blast a hole in the roof of the police car and escape away to freedom, yelling, “Larry deserved to die because I deserved that gift card!” as he rocketed north, followed by fighter jets scrambled from MacDill Air Force Base that eventually shot Klurrzh down over the old dog racing track.

The cops took me to jail in his place because they couldn’t show up empty-handed AND with a hole in their car’s roof. Now I’m in jail, thinking about how Iron Man turned out to be a bad guy in this story.