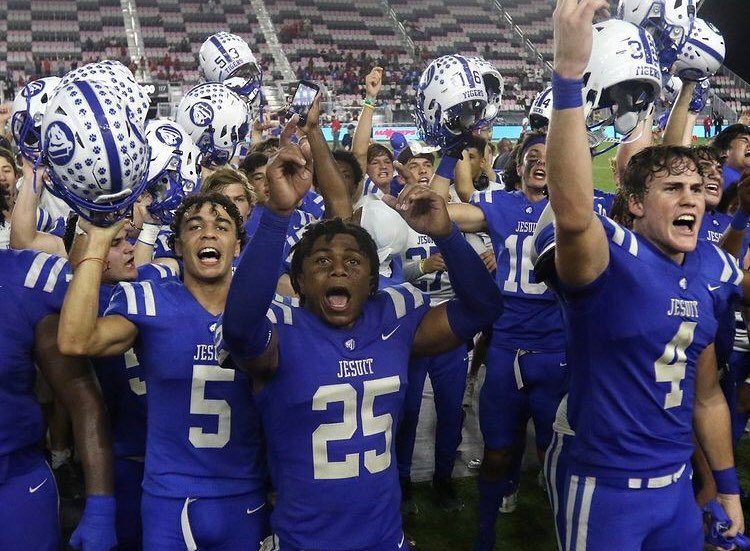 Here we are, once again, seeing this country’s impressionable young men emulating the behavior of their “heroes” in professional sports. This time, the victims are the Tigers of Jesuit High School in Tampa, completing a 15-0 season with a 35-29 win over Pine Forest (Pensacola) a couple of weeks ago to capture the 6A state championship, rallying from a 29-14 deficit in the second half.

Jesuit hadn’t won a state title since 1968 but following in the footsteps of the Tampa Bay Lightning and Buccaneers, they went ahead, caved into peer pressure and won a championship of their own.

If Andrei Vasilevskiy jumped off a bridge, would a high school sports team do it too? If Tom Brady ate Tide pods would the Jesuit Tigers do it too? Apparently yes, if there were trophies awarded for doing things like that.

In 1993, Hall of Fame basketball player and philosopher Charles Barkley said, “I’m not a role model. Just because I dunk a basketball doesn’t mean I should raise your kids.” And oh how right he was AND STILL IS: A role model should also grab rebounds on both ends of the court, run the floor on fast breaks and transitions, have ball handling skills, play tight defense without being susceptible to falling for shitty ball fakes, hit three pointers sometimes and average over 20 points a game. THOSE are the traits of someone who is better qualified than you to raise your kids, and none of them are relative to the sport of football.

These so-called “‘athletes'” (note the excessive overuse of quotation marks to fully illustrate a sense of incredulity), who all make billions of dollars over their long careers are doing our children a disservice by showing them that being good at something and working hard at it can yield professional rewards and personal gratification. Where is the next generation of suckers to be preyed upon by opportunistic, self-titled “‘success coaches'” (again with the quotation marks) and other parasites going to come from if kids aren’t raised to believe that they’re losers?

Worse, the problem appears to be a self-sustaining cycle; the Buccaneers, following the lead of the Tigers, clinched the NFC South Division title Sunday with a 32-6 win over the Carolina Panthers this past Sunday, their first division championship since 2007.