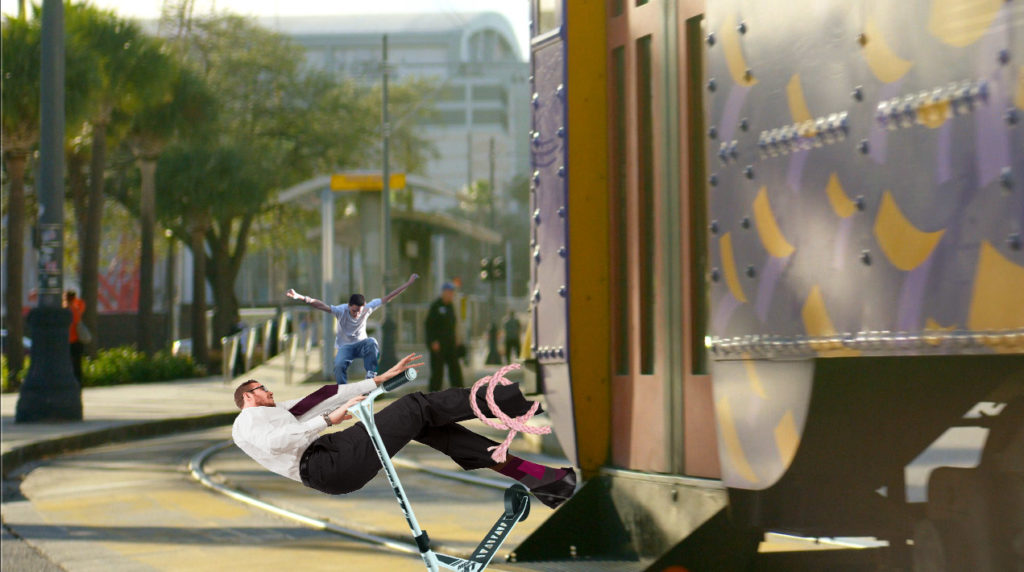 The Florida Department of Transportation (FDOT) unveiled its latest plans for the proposed expansion to the Tampa Streetcar today to a standing-room only crowd at a local co-work space.

To much suprise, the new streetcar plan will include grind rails for skateboarders and inline skaters, as well as hand grip pads attached to the back of each streetcar for bicyclists, skaters and scooter riders to hold-on to (commonly referred to as skitching).

“This is what I’ve always wanted from that silly looking streetcar thing,” says local hipster/barista/tattoo artist Jacob Lakewim, 28. “I’ve seen pictures of the old streetcar system that ran through Tampa and always wondered what could have been.” Lakewim took a sip of his nitro-brewed iced-coffee with coffee ice cubes and attempted to sell me on one of his tattoo designs, I declined and asked him about his skateboard.

“Oh this thing, yeah I can only longboard now because of my knees but if I can skitch back to my parents house, I can justify coming down to Ybor every night,” says Lakewim.

Skateboarders and inline skaters hugged at the announcement of the grind rails, but it was the scooter ropes that had many wondering if the county was perhaps a bit too ambitious with its plans.

“I’ve seen scooter ropes work real well in places like New York and San Fran. You know, like big cool cities,” says Madison Wellered, 23. “I don’t think I want to tie my foot to a rope and let a streetcar drag me while I hold on to an electric scooter in the summer when it’s all humid.”

Construction will soon begin on the proposed expansion and city officials hope the transportation fads don’t go out of style before the project completes.