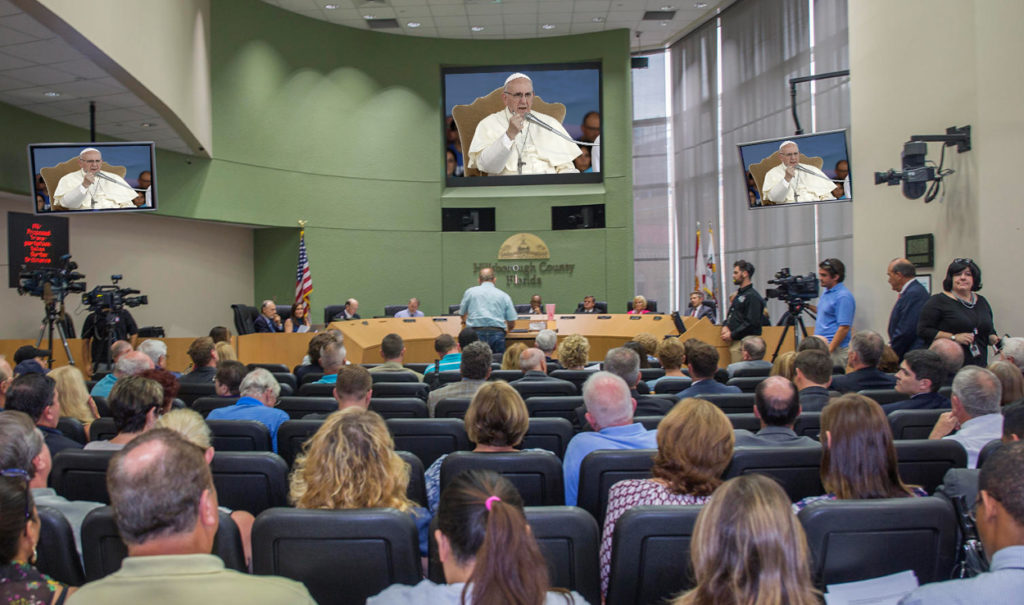 The Pope was set to arrive in Tampa this Friday, however he suddenly cancelled the trip citing “lack of prayer.”

“They don’t pray enough,” said the pope as he finished washing a peasant’s feet. “There are many good people in Tampa. Many God-fearing, wholesome individuals in Tampa, yes.” He struggles to speak English but you can see he’s genuinely trying. “I speak to God every day. He say more people pray in Ohio and Minnesota. He say I should go somewhere else before Tampa, I come one day.” He pulls the door closed on his air-tight, vacuum-sealed, glass car.

The pope was visiting to witness the miracle of the Virgin Mary in the strippers asshole on Dale Mabry, as he had heard many good things from his cardinals, however now he will only get to experience the miracle from FaceTime.

“I will still see Holy Mother and kiss babies head,” Says the pope via blackberry messenger, “But I no come physically.” He sends a wink sad face.

“The pope was coming to town?” Says Cliff Riffbar, as he takes one headphone out and turns his head on his skateboard. “That’s crazy!” He shouts as he cliff dark-slides down a memorial bench. “I can’t wait to meet him!” Cliff misunderstood the story.

“It sucks!” Says Crystal, 22, the now household-name stripper who possesses the miracle inside her. “I was ready to spread it open for the pope, let him see his mom or some shit, it’s whatever. I still get paid.” She does a back-flip, lands in the splits, and a mountain of cash is dumped on her from the ceiling.

The pope sent us a written letter the next day overnighted from FedEx which read, “I love the people of Tampa, I wish I could come see you, but God won’t let me. I know that you pray, but he want you to pray more. So pray more. And I come see you… P.S. Go Bolts!”

The city is urging citizens to “pray more” so the Pope will come see us.