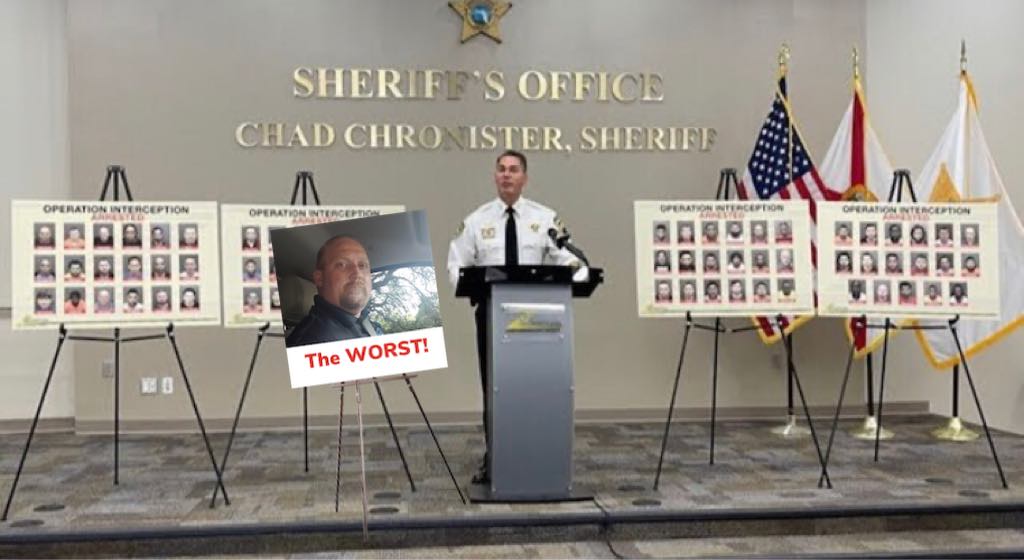 Between December 7, 2020 and January 9, 2021, undercover detectives posted online ads and female detectives posed as prostitutes on the street, resulting in the arrest of 71 men who agreed to pay for sex, Chronister said at a news conference. “One of them is this guy, Larry Leard of Brandon”, he said, gesturing to a poster on an easel with one photo on it, positioned in front of other posters on easels with lots of photos on them. “Look at this piece of trash. I’d like to punch him myself.”

In lieu of a face punching from Sheriff Chronister, Leard and the other men will face charges of soliciting another to commit prostitution or entering/remaining in a place for prostitution.

“Our goal is to intercept those involved in sexual exploitation before they’re able to take advantage of the vulnerable individuals in our community and ultimately, hopefully, deter others,” Chronister said, noting Monday was National Human Trafficking Awareness Day. “And that’s exactly what we did. We got Larry Leard, shown here on a poster all by himself, that rat bastard.”

“We know from past experience with major sporting events there will be some who travel for the exclusive purpose of taking advantage of women and children”, he added. “That’s on top of the lowlife scum Larry Leards who already live among us, such as Larry Leard himself.”

When asked why Leard was getting such specific attention when there were 70 other men arrested, Chronister said, “It’s important to put names on these guys so the public understands these are real people who could be neighbors or co-workers. But these press conferences are short; people can look all of them up later but for now, they just need an example presented to them. Plus, just look at him. Hopefully, this gets him fired from whatever shitty job he has, if not beaten severely in the middle of a street.”

Chronister then punched that poster, causing it to fall down.