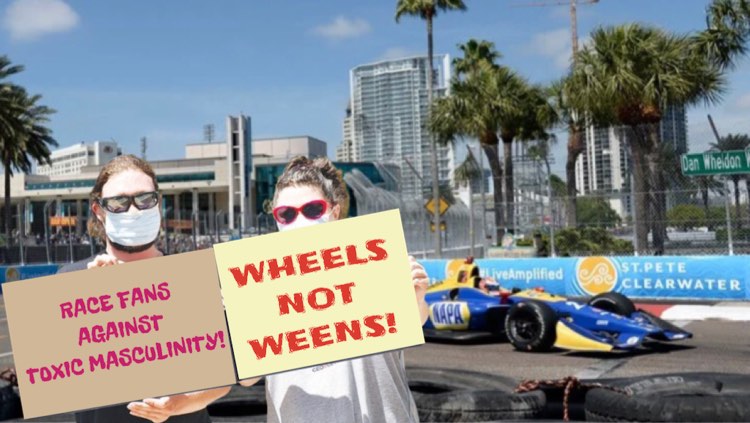 A group of protestors attempted to disrupt Indy Pro 2000 qualifying at the Firestone Grand Prix of St. Petersburg this morning in an attempt to get the event cancelled.

“We’re huge fans of Indy racing itself but the name of the race is highly offensive”, said Thad Talbert of St. Pete. “We just want to enjoy the beauty of the sport without having enormous phalluses thrust repeatedly into our face. But if that can’t happen, then the event needs to go away forever.”

Apparently the group’s problem is with the name ‘Grand Prix’, which is a French phrase meaning ‘Grand Prize’.

“Anybody who has ever had coffee knows ‘grande’ means ‘large’, except that it’s medium at Starbucks for some reason”, said Valerie Mallory, also of St. Petersburg. “And the second word may be pronounced as ‘pree‘ but that’s not how it’s spelled. It’s soooo obvious what the patriarchy is saying.”

Grand Prix motor racing has existed since the early 20th century and takes place on closed highways or other courses intended to simulate road conditions and is the most popular kind of racing internationally. The St. Pete Grand Prix dates back to 1985, with IndyCars first competing in 2003. Since 2009, the race has served as the sport’s global season opener.

“Look, none of that history or facts or what the words actually mean matter”, said Mallory. “What matters is how the way the words sound make me feel about it. And if I feel bad about it, then it needs to not exist.”

In 2019, the protestors demanded that the race be re-named ‘Grande course de voitures de prix de participation non spécifique au genre non binaire’ or ‘Big non-binary gender non-specific participation award car race’, which was rejected outright by race organizers and sponsors, resulting in their boycott. This year, they say they’ll settle for ‘Pronoun 500’. A spokesperson for the Firestone Tire and Rubber Company, the race’s title sponsor said they might be willing to consider that as a suitable option in the future.