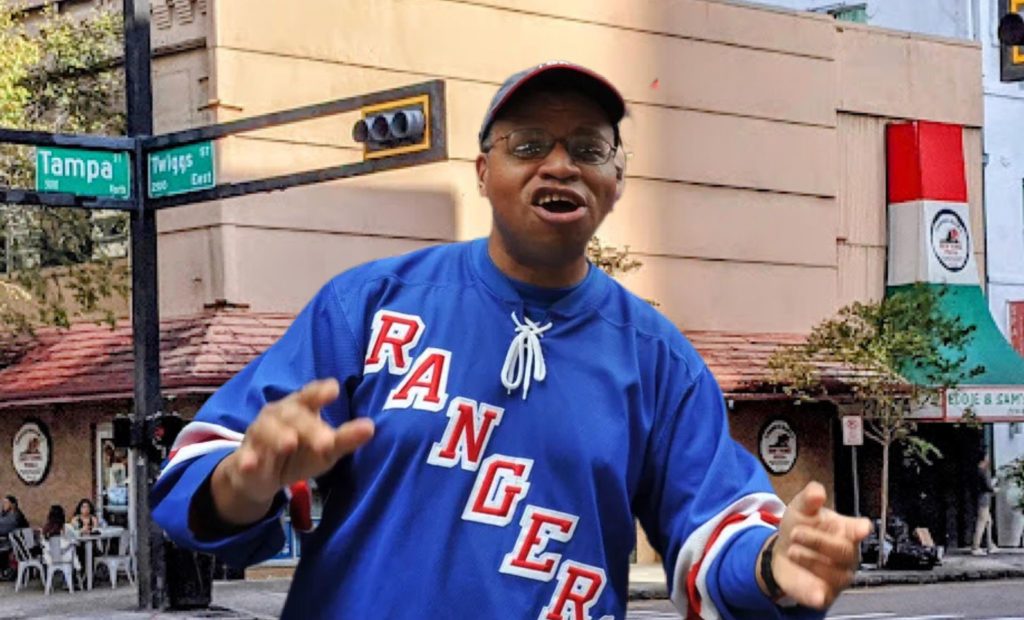 Lonnie Keith, who lives in Brooklyn, is in Tampa to watch the Eastern Conference Final between the New York Rangers and the Tampa Bay Lightning and can’t seem to find any of the things he can find in abundance in New York.

“Yo, where’s the subway? You’ze don’t got no public transportation over here?” he asked, as he stood on the corner of Twiggs and Tampa Streets in downtown Tampa. “What am I supposed to do, drive, in a car, and park it somewhere near the arena and then walk a short distance? Yeah, right!”

He went on to complain at length about amenities that are taken for granted in New York that simply don’t exist in Tampa.

“Your theater district is one theater,” he said, dismissively gesturing toward Tampa Theatre on nearby Franklin Street and not even acknowledging the Straz Center for the Performing Arts. “Whatta joke!”

“This place is like somethin’ outta the stone ages. Your pizza is shit,” he said, before noticing Eddie & Sam’s across the street. “Actually, I had lunch there. Not bad. But I’m guessing everywhere else in these boondocks you call a city, it’s basically cardboard with ketchup and cheese, right? Of course I’m right.”

“How come I can’t find a decent bagel?” he queried. “Don’t you even have any Jews?”

“What about 24 hour Chinese food delivery? Never mind, I think I know the answer to that. Because I don’t exactly see a lot of Asians runnin’ around out here.”

“You don’t have a Guggenheim or a Statue of Liberty and your Hudson River is pathetic.”

“I’m surprised you have running water and electricity because you pretty much got nothin’ that makes New York so great. Haw haw haw haw haw! What’s one good thing about this place? Just one!”

He was then directed to the world renowned Tampa International Airport, which features approximarely 50 flights a week from Tampa to JFK Airport in New York every week.