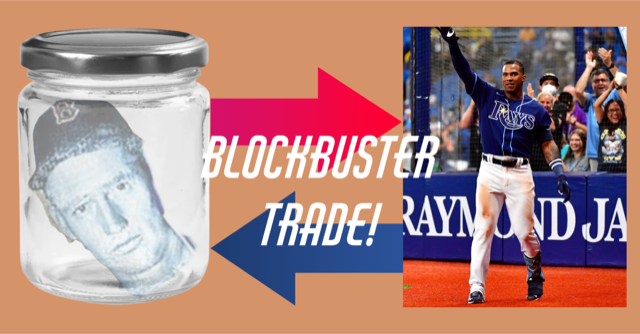 In a stunning late-season development, the Tampa Bay Rays have traded shortstop Wander Franco, their brightest up-and-coming star player to their interdivision rivals the Boston Red Sox in exchange for the frozen head of deceased Hall of Famer Ted Williams.

“As an organization with unique revenue challenges to overcome, our focus is always going to be to compile as much youth and depth as possible”, said Rays general manager Erik Neander. “And yes, Wander is only 20 and already producing at the big league level. But when science finally figures out how to thaw out Teddy Ballgame, one of the game’s all-time greats will be back and better than he ever was. Presumably with some sort of robot body. Plus, we can extract unfrozen cyborg Ted’s DNA and the zygotes we’ll be able to produce will give us an unlimited supply of Splendid Splinter replicants forever and ever!”

“Until that time, the last man to hit .400 in the Majors will have his head displayed prominently at the Carvel concession stand in the 1st base side food court at Tropicana Field, where fans will be able to pose for selfies.” He added, “We’re just asking everyone, please don’t lick Ted’s cryo jar. Because of safety, you know.”

Through Tuesday night’s game against the Red Sox, Franco was hitting .290 with 7 home runs and 36 runs batted in over his first 60 Major League games. Williams, who last played in 1960, died in 2002, with his severed head being cryogenically frozen and kept in a cryonics facility in Scottsdale, Arizona, since then.