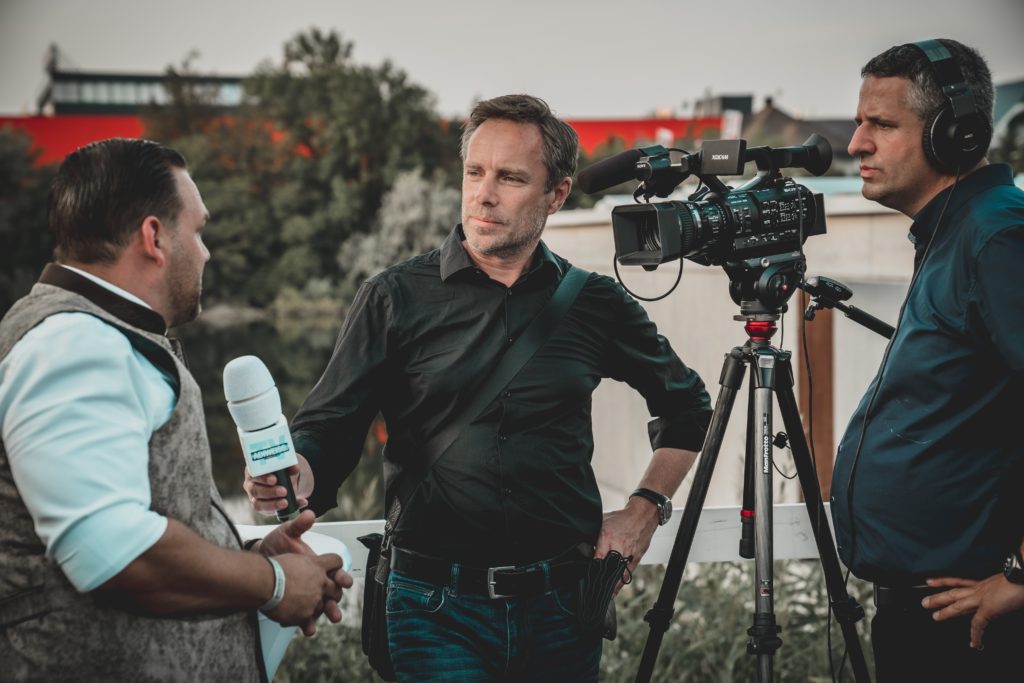 Mitch Maley has been a freelance journalist in the Tampa area for the past two decades. Earlier this week, he shocked a handful of marginally-interested readers by confessing to his involvement in a conspiracy organized by globalists intent on ringing in a new world order.

On Monday, I attended an impromptu press conference that Maley, 45, had hastily organized behind Scarlett’s Ybor Strip. No other members of the press had shown by the time I arrived and Maley—a large, hulking man with a shaved head roughly the size of a watermelon—was smoking medical cannabis from a dab pen, while leaning against the wall when I caught his attention. Wearing frayed denim cutoffs, flip flops and a faded Joanie Loves Chachi t-shirt, he was looking worse for the wear.

“Look, I’m out, okay?” said a disheveled Maley, who at times bordered on incoherent during the 20-minute junket. “I carried their water for years. I swallowed my pride and wrote those bullshit articles about global warming and a guy whose middle name was Hussein not being an Arab or a Muslim! I kept my lips zipped about that rip in the time space continuum when that pill-head fucked up the supercollider and never said a word when they erased all records of Shazaam!”

“Yeah, that stupid movie where Sinbad was the genie,” screamed Maley, spittle flying everywhere and no mask (N-95 or otherwise) in sight. “Everyone saw it, everyone knows it existed. Hell, 200,000 teenage boys got hand jobs from their girlfriends at drive-ins during its run, but go online and try and find it? Go to IMDB, nothing! Go to Netflix, nothing! Hell, you can’t even find that flick on Crackle—and they got Joe Dirt 2 on Crackle!”

Just then, a metal security door swung open and an Asian waitress or dancer from the club emerged, handing Maley a Yuengling.

“Tā shì shéi?” the small woman barked with a shrug that suggested it was a question.

Maley grabbed her wrist aggressively and leaned in toward her tiny face.

The woman issued me a suspicious side glance before retreating back into the building.

“I thought all clubs were closed?” I asked.

Maley arched an eyebrow and chuckled.

“Who can go where is always a fluid situation, my friend,” he said with a wink. “This whole thing has been a boon for champagne rooms, I can tell you that much. It’s just that they’re on the side of the ledger that never gets accounted for.”

“Does she work at the club,” I asked, immediately regretting the question.

“Who knows?” he said, hitting the vape pen before taking a long pull from the green beer bottle she’d handed him. “She could be Yakuza, she could be Triad. Hell, she could be fucking Mossad for all I know. What? You don’t think Mossad’s got Vietnamese agents? It’s 2020, my good man.”

He looked at me with the crazed eyes of a rabid coyote, arched a brow and nodded. I pretended to understand what he was talking about, offering a weak nod and muted chuckle. Maley smiled and began kneading the scruff of my neck—right at the spot where a better developed man’s trapezius muscles would be—with his giant monster hands. After an uncomfortable amount of time had elapsed, I pressed on, hoping he’d stop.

“Was there, uh … something you were gonna announce?” I finally asked, looking side to side in a way that I hoped would remind the giant lunatic that I was the only reporter who had shown up for the scrum. His face registered indignation, but at least he withdrew the hand.

“Uh, yeah, that I’m done!” he shouted. “Finished! I’m out of the whole thing. I’m not coming to the Bilderberg conference, and they can forget their overpriced dues for the Bohemian Grove retreat. Why the fuck should I have to pay good money to see Slick Willie playing grab ass with Dick Cheney at some homoerotic third-rate bonfire where Mitch McConnell’s saggy balls are always hanging out of his toga like two eggs at the bottom of a nylon stocking? The food is shit and they replaced all of the Asian prostitutes with cheaper ones from Eastern Europe!”

“They say they’re from Ukraine, but one look at the suspect dentistry and you know they got ’em from Serbia.”

“I’m not sure I get—” I stammered, as he gave me brisk slap with the back of his hand, causing my knees to buckle.

“Sorry,” he said politely, as he recommenced with the painful shoulder massage, leaning in to softly kiss the crown of my head. “Look, I’m a single dad. I owe money all over town. I had Brady going to the Chargers at 2-1 and Gronk starring in an online reboot of Girls Gone Wild next year—on a fucking cruise ship, no less. I can’t even cover the vig, let alone the nut. If it weren’t for the monthly check from the Bill and Melissa Gates Foundation and the annual bonus from George Soros, I wouldn’t be able to put food on the table. You know the score.”

He stared into my eyes for a long time, as if I was supposed to know what to say next.

“The vaccine, man!” he screamed. “We were supposed to get the vaccine!”

I felt a lump in my throat as I swallowed.

“Every year, whoever did the best job advancing the Clinton agenda would get to board the Lolita Express and enjoy a 10-day all-expense-paid trip to Fuck Island!” blared Maley, a thumb-sized vein quivering over the temple of a head that literally seemed to be growing during our interview. “I was this goddamned close,” he shouted, one vice grip paw still molesting my shoulder, the other visually representing the modest distance between himself and the infamous den of iniquity off the coast of the Bahamas.

“I put my time in, I waited my turn,” he continued. “Snowden earned it, no argument there. So did that spook that capped Seth Rich before he sang like that dead broad from the Cranberries, but this was my year! Then they go and fake his death, send him off to some undisclosed location managed by the Illuminati at the far edge of the flat Earth where they do all those fake space shots, release one of their bio-engineered viruses to tank the stock market and get the chips in people, and turn off the safe 3G service to all of our burner phones.”

“So?,” he screamed, throwing the now empty bottle on the ground, where it smashed into pieces. “So, you think these cocksuckers are listed in the phone book, Ace? They call you! If the phones are off, that means you’re no longer needed!”

“So, what will you do now?” I asked, hoping to God there would be something resembling a point to this whole encounter.

“I go legit,” he said. “I see if Breitbart or the Epoch Times will take me on. I mean it’s not like OAN would ever touch me at this point.”

Suddenly, his jaw dropped and his face went pale. He was looking at something behind me. I turned to see a black helicopter, silent, despite the fact that its rotor blades were still still turning at full speed. Two men in black suits and dark sunglasses pushed me aside and stuck Maley’s neck with a syringe. His giant head fell to the side and the two men each put an arm under one of his shoulders, as his body buckled. I cowered in fear, certain I was next, but they moved right past me, dragging him toward the chopper.

“I won’t print anything, I swear,” I screamed, as they shoved his comatose body onto the bird, his enormous head hitting the metal above the door opening with a thud as they did so.

One of the men, turned back toward me and lowered his shades.

“Yes, you will,” he said. “Tell them everything. Most people won’t believe a word. The ones who need to know, however …”

He gave a knowing shrug and jumped into the chopper, which silently ascended into the vanilla sky of the evening dusk. It seemed to be heading south and, for a moment, I thought maybe they were taking him to Fuck Island after all and smiled at the thought of him cavorting with nubile woman from exotic locales. Deep down, however, I knew better.

Dr. Ringo Khan is a freelance journalist and part-time DoorDash employee. He holds a PhD (equivalent) in “general studies” from Khan Academy (no relation). His work is archived at www.lettersfromthewasteland.com