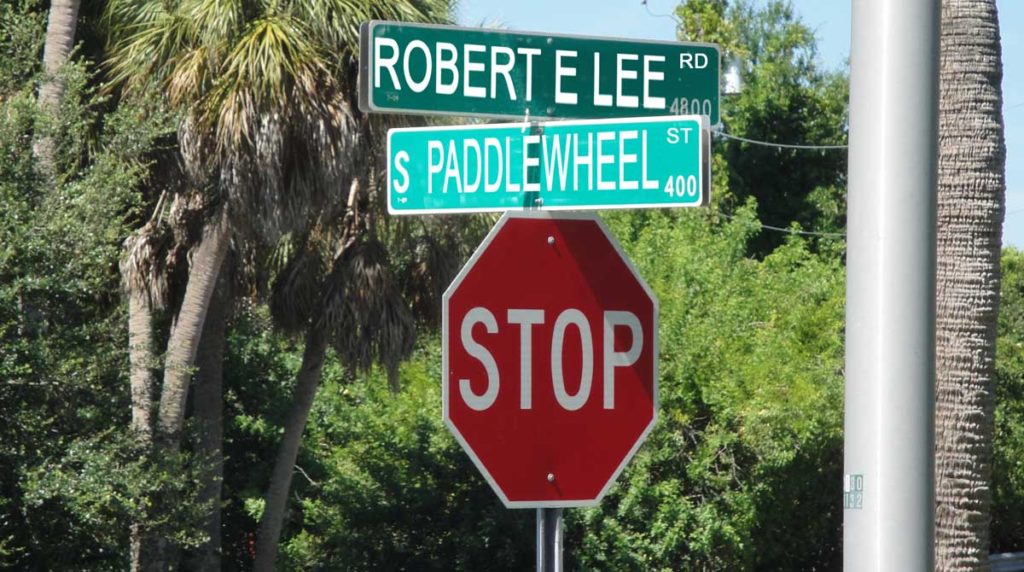 Tampa residents are more divided than ever as the city might have fallen prey to a deviation in our conceivable timeline or what is colloquially known as “The Mandela Effect.”

Conspiracy theorists from all over the world are traveling to our beloved city with their electromagnetic frequency meters, laser grid scopes, and full spectrum cameras to monitor a small stretch of road just south of Temple Terrace Highway where they believe a cosmic event may have happened, a rift in the spacetime continuum.

“This is very exciting for me as a Tampa resident,” says a veteran paranormal investigator who wished to remain anonymous for fear of government surveillance, “I’ve been tracking paranormal events for 23 years and to have an event of this magnitude occurring in my own backyard is exciting just to think about. This affects whole tens of people.”

The stretch of road in question is none other than Robert E Lee Road, which measures just over 1,100 feet, starts at Steamboat lane and surrenders a few blocks over at Paddlewheel Street. The titular road gains its namesake from the late civil war general and father of the modern day participation trophy.

It seems though that an incidence of false memory is on the rise as many residents insist the street has always been named after critically acclaimed thespian, Robert Englund, best known for playing Freddy Krueger in the “Nightmare on Elm Street” series, widely regarded as one of the greatest franchises in cinema history.

One resident was outraged upon discovering the phenomenon. “Of course it’s always been Robert Englund Road. Why would any city anywhere name anything after some <expletive> Confederate <expletive>? That guy killed people for a racist cause! Robert Englund masterfully played the part of someone who killed teenagers as a vengeful spirit, having been burnt alive by fellow residents on Elm Street in a vigilante act of perceived justice. But he never actually killed anyone in real life, as far as we know.”

The science behind the Mandela Effect is certainly questionable but centers around the idea that all events unfold differently in a multitude of parallel universes. The Mandela Effect is the collateral damage of these timelines colliding. Some people have memories that differ from everyone else around them. It gets its name from the South African revolutionary Nelson Mandela, who famously died in prison, but is remembered falsely by many to have survived prison and even went on to become President of South Africa.

But even some conspiracy theorists are skeptical. “Look, obviously the Mandela Effect is real. Even members of the government have acknowledged that. But I think someone is just abusing a naturally occurring event in a scheme to get us to change the street name after some globalist Hollywood elite. Not happening. Robert E Lee was a great man,” says Clive Beauregard III. When we brought up Lee’s legacy being on the losing side, he declined to comment, saying only, “You’re on the losing side!” And he left in tears.

The real catalyst for the sudden controversy involves local filmmaker Gavin Hamer who started raising awareness around the confusion when he took his cast and crew to his old stomping grounds to show them the house that inspired their upcoming film “Nightmare on W Elm Street”, an non-canon addition to the Nightmare franchise in which a monster known as Creedy Fruger goes on a killing spree just south of Sligh Ave.

“I grew up in a house on Robert Englund Road. Wes Craven movies were a big part of my childhood. Robert Englund was a master of his craft and inspired me to get into filmmaking. I took the cast and crew to my old house and that’s when someone pointed out that it said Robert E Lee Road. We looked it up and were shocked to find tons of people who said it’s always been called that,” Hamer exclaimed desperately. “The Mandela Effect needs to be acknowledged by the scientific community. I mean what’s the alternative? That we just have bad memory?” No release date announced yet on his movie as it is perpetually in development.

Which do you remember? Robert E Lee Road or Robert Englund Road? Let us know in the poll!