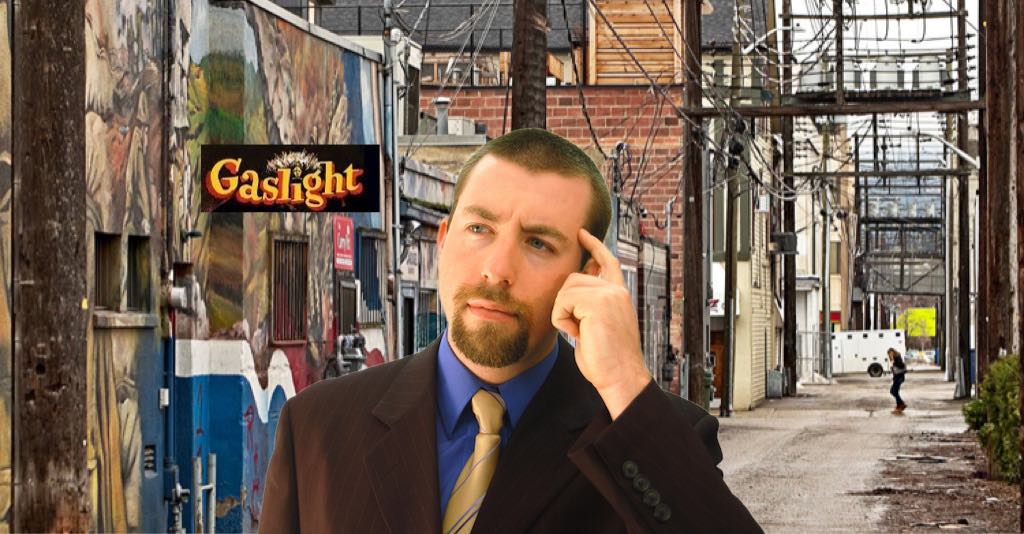 Local chef, Andrew Washburn, has opened a hip new restaurant in the heart of Ybor called the Historic Gaslight Cafe. The location is somewhat of a challenge to find, though, as the sign out front appears to be for a typewriter store.

Nestled in a dark, poorly lit alley with a rusty chain-link fence which creates a dead end at one side, the Historic Gaslight Cafe is advertised as a “safe and welcoming space with great specials and a weekly Ladies Night”.

Despite having just opened, a mural on the wall proclaims: “The Historic Gaslight Cafe – Proudly Serving Ybor Since 1906!” Upon entering the cafe, patrons are greeted by puzzled employees in a kitchen who politely remind them that the entrance is “actually in the back”.

“Come on, you’ve been here before!” said one dishwasher before rushing a startled couple out the door to the street.

During our visit to the Historic Gaslight Cafe, I ordered a seared ahi tuna appetizer, a tomato bisque, and a Moscow mule. Our server, Miles (whose name I could’ve sworn was “Chris”), brought us a mushroom bacon swiss burger and a mason jar full of gin with several olives, capers, and unidentifiable pills floating in it. When I suggested that Miles must’ve gotten the order wrong, he showed us his notepad and offered to even show us security footage if I was “going to make a big deal about this.”

Miles went on to say, “You even asked for extra pills. And I wasn’t going to charge you since we went to high school together.”

When I asked what the pills were, Miles simply shrugged and said, “Whatever you ordered. I just shook ‘em out of the jar.”

Curiously, when I paid my bill, I wasn’t provided with a receipt. Or change. Or boxes. Even though I asked several times.

When I approached Chef Washburn about this, he said, “That’s part of the Historic Gaslight Cafe’s climate pledge. They’re paperless,” and paused briefly. Then said, “Not that I work here. I just stopped in to get new ink ribbons for my Underwood.”
Then, Chef Washburn promptly went back into the kitchen and came out with a box of typewriter ink.

“We went in hungry, but left utterly confused,” said Ted Yandrick, as he and his girlfriend left the restaurant. “I can’t believe she insisted we go here. I mean, she says she never heard of it. But then why are we here?”

“I didn’t!” said Lara Zallas. “I’ve never even heard of this place!”

Whatever the case may be, the pills hit just right and I’ll  be more than happy to return to this lovely slice of Americana right here in the heart of Ybor.