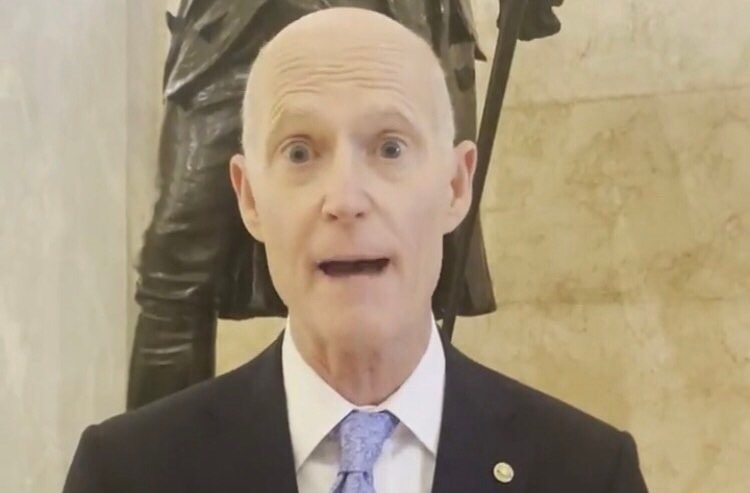 Earlier today, U.S. Senator Rick Scott of Florida stopped just short of a full endorsement of Critical Race Theory (CRT), the extremely controversial and dangerous academic concept that teaches the core idea that race is a social construct, and that racism is not merely the product of individual bias or prejudice and also that white people might not be the heroes of every story.

In a 24-second video posted to one of his Twitter accounts during which he never blinked because blinking is considered a show of submission by his species of reptile, he said, “In 2018, I signed legislation that picked Mary McLeod Bethune as an individual we would highlight in the U.S. capitol (with a statue). Mary McLeod Bethune was a wonderful lady; she educated an unbelievable number of women. Ultimately she was the founding of Bethune-Cookman University that’s educated so many wonderful Floridians.”

Mary Jane McLeod Bethune was an American educator, philanthropist, humanitarian, womanist, and civil rights activist. She was also a Black woman, a condition known among many conservatives as “Strike Two”.

Bethune–Cookman University is a private, historically black university in Daytona Beach, that began as the Daytona Educational and Industrial Training School for Negro Girls in 1904.

“Oh no, Rick baby! What is you doin’?” queried his senatorial colleague Marco Rubio, chuckling. “Ha ha! I said it like a Black person! Get it? Isn’t that funny? It’s Chris Tucker, I think. or maybe Eddie Murphy. Ever heard of them? Aw, you don’t get it. Never mind.”

“Anyway, oh well, I guess since he acknowledges that these people exist and that some of them aren’t villains, even though this Bethune person did civil rights and educated who? Women?? Black ones??? Looks like Rick Scott is woke now,” he said. “Never thought I’d see that but let’s see how it works out for him. What’s next, grand marshal in a Pride parade? Oh no you didn’t! Oh no you… ah, I give up. You just don’t get Black people comedy.”