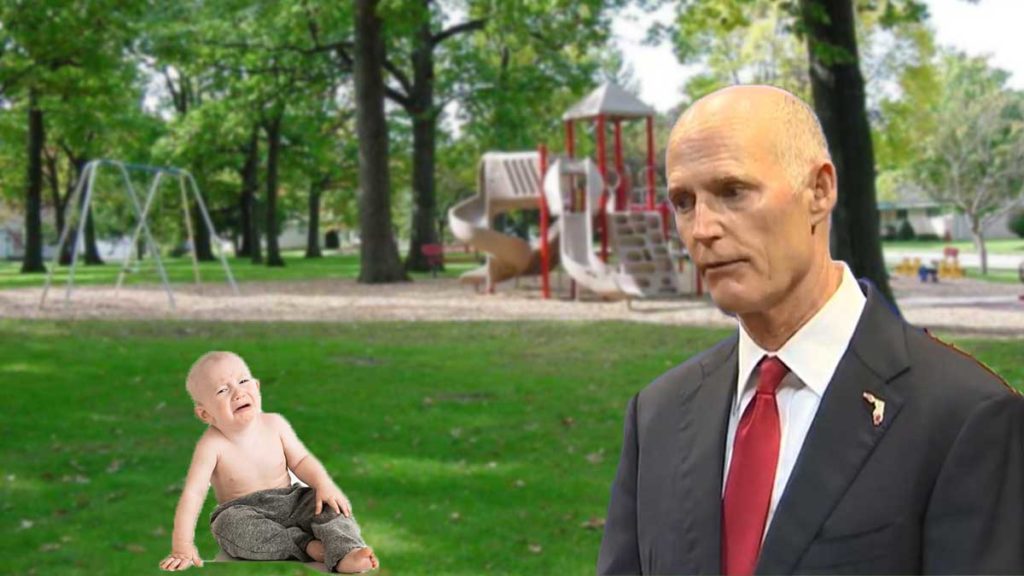 In a seemingly out-of-character move, Florida’s Senator, Rick Scott has kicked a baby in the nuts during a ribbon cutting ceremony at a new Pinellas frozen yogurt shop. Scott had just morphed his right hand into a pair of sharp fleshy scissors, when an infant stumbled out from the crowd into Scott’s space. The giggling of the baby caused Scott’s eyes to turn smokey black, filled with rage against the joy of an innocent child, who had not yet been effected by Scott’s policies of corruption.

The crowd knew Scott was going to do something evil to the baby, but nobody wanted to intervene because as usual, everyone feared for their lives because Rick Scott was around.

“I’m only here because they paid me.” Said Fret Necklace, a paid professional political event attendee.

“Obviously nobody likes this guy, so we get paid double our rate to show up and pretend to enjoy whatever bogus, nonsense spectacle is taking place.”

As Necklace talks, his neck suddenly begins getting tight and he begins to panic.

“He’s choking me! I can feel it, Rick Scott is force-choking me from his Ivory tower because he can hear me speaking ill of his name!”

Necklace is raised into the air and his limbs begin collapsing in on themselves.

“Tell the people I was an honest man, even though I took shady political stand-in gigs off craigslist!”

Necklace screamed right before exploding in a puff of gold dust.

Another paid attendee steps up to finish Necklace’ recollection of the events which took place.

“So anyways, the baby was laughing, then Scott, clearly enraged, winds up, takes a running start, and just punts this baby right in his nuts, assuming it’s a boy, I couldn’t really tell, it was too young to gender-assign.” Says Pete Labia.

“The crowd gasped, before immediately returning to silence out of fear Scott may turn his violence towards us.” Labia said.

“Then the baby’s mother ran up to scoop him up and run as quick as she could, but before she could do that-“

Labia then explodes into gold dust in a similar fashion to Fret Necklace, however this time there was no force-choking or dramatic build up, just an instantaneous explosion mid sentence.

The baby was taken to a pediatrician and was treated for minor bruises to his confirmed male baby-loins. In an act of humanitarianism and brand/image cultivation, Governor Ron Desantis paid the child’s medical bills, and made sure the child got home safe, as the mother is currently being held in a private prison owned by Scott for her negligence in letting the child wander through Scott’s ribbon-cutting ceremony.

“Scott told me I needed to spend my own money to make sure the baby was ok, because he is a caring man, despite what people may think, even though the act of forcing me to pay for the baby’s bills is a bit harsh on my end, and he totally could have paid the bill himself.” Desantis said.

“Oh no, I feel my neck tightening! Please lord Scott, don’t take me now!” Desantis screamed. His body began floating slightly off the ground, before lowering back down to the earth, as Desantis throat loosened. “Oh thank God!” He shouted.

“Thank you lord Scott for sparing me! I will never sarcastically comment on your morality again! You are the supreme ruler!” Desantis does some sort of weird complicated hand signal to the sky before kissing the ground in gratitude.

No one knows whether the baby has been taken care of or if the mother will be released from prison anytime soon. Oh God, I can feel my neck tightening. HELP ME!

Edit: in the first sentence the author wrote “in a seemingly out-of-character move” however it has been noted that the move was not out of character, and was totally on brand.