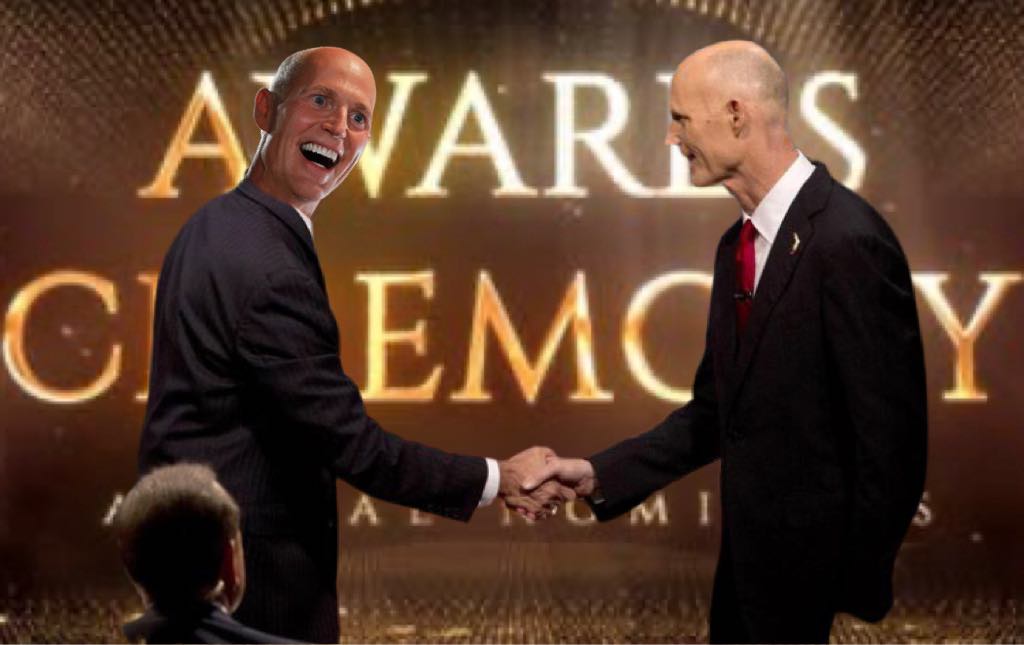 Last night in a ceremony in Tampa, US Senator and former Florida Governor Rick Scott presented an achievement award to himself.

“I’ve been travelling around a lot, handing out various awards to deserving recipients, and it suddenly occurred to me the other day, you know who really deserves an award?”, he said. “Me.”

A gathering at the palatial ballroom of the Dutch Motel on Hillsborough Avenue was on hand to see Scott take the stage and announce, “It is my pleasure to announce that the winner of the First Inaugural Rick Scott of the Year Award, which is bestowed upon the person who demonstrates the most Rick-ety Scott-edness in the field of Rick Scotting goes to… me! Rick Scott!”

The assembled crowd chuckled politely, thinking the man who is credited with committing the single biggest case of Medicare fraud in history was making a joke. Suddenly, to their abject horror, through the process of mitosis Scott split into a second, identical copy of himself. The two Scotts shook hands and the original handed a burnished wood plaque with a brass plate reading “GOOD JOB, RICK!” to his new twin.

“My God, there are two of them”, said one attendee, reaching for his legally concealed handgun.

Sensing the audience’s unease, the original Scott said, “Relax everyone. I’ll handle this.” The two then began to wrestle one another. Eventually, one of them (at this point it was impossible to know which was the original and which was the copy) killed the other one by beating it over the head with the award, it then ate both the carcass and the award itself.

“Mmmm, delicious!”, it said, with it’s own blood dripping from its fangs. “Eating a Rick Scott every day makes Rick Scott big and strong!”, as the assembled crowd fled the ballroom in terror.