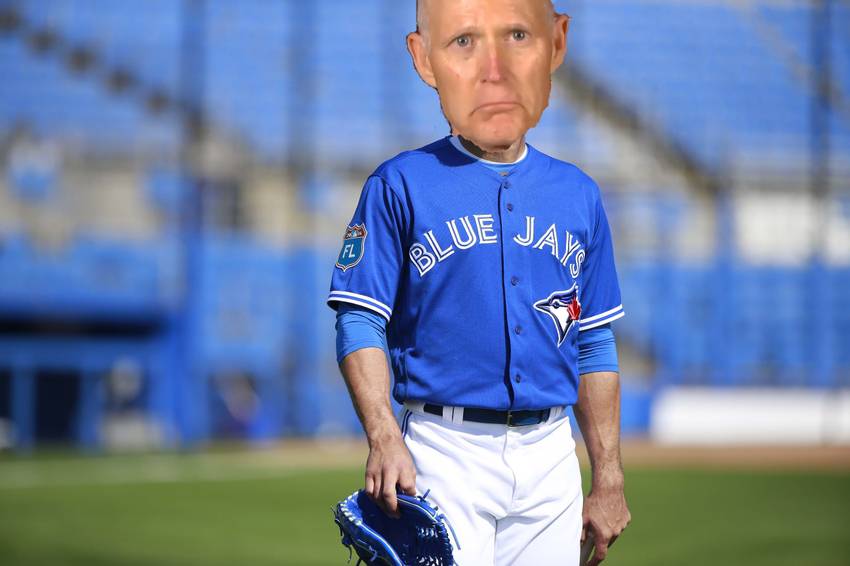 Senator Rick Scott has been released by the Toronto Blue Jays just prior to today’s game spring training game against the Baltimore Orioles.

“We want to thank Rick. He really worked hard out there and gave us his all, but ultimately it’s a numbers game and we’re pretty much set at that position. I can certainly see him getting picked up by another organization though. Good kid, really hustles”, said Blue Jays manager Charlie Montoyo. “Wait. I thought you were talking about that kid from Iowa we picked up on waivers from the Padres. You mean the bald idiot who’s been sneaking around like a pervert? I asked security to kick that dipshit out of here two days ago.”

Scott apparently showed up at the team’s training complex in Dunedin, hiding under bleachers, crawling around on the ground with binoculars and wearing disguises, including painting his bald head to look like a baseball as a means of camouflaging himself.

“Security personnel tried to follow him around in order to to shoo him away, but he’s really sneaky. I have no idea where he got one of our uniforms but that made it even more difficult to keep tabs on him”, says Blue Jays general manager Ross Atkins. “Eventually, our only option was to unconditionally release him from the contract that he was never even offered.”

Scott was bitterly disappointed. “I figured since stealing signs is such a big part of baseball now, I could be a valuable asset to a Major League team. Running, throwing and hitting, eh, not really my thing. But if stealing signs is anything like stealing from Medicare, I’m already an all star!”, he said as what looked like tobacco juice drooled down his chin. “It’s not tobacco juice”, he said, smiling weirdly before turning into a lizard and scampering away.