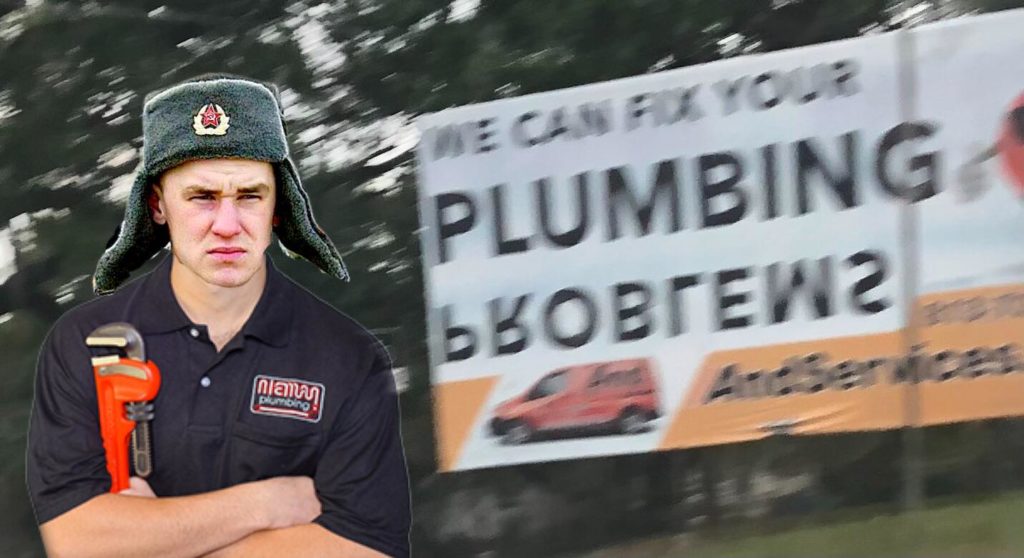 A billboard in Russian has appeared on Tampa Street in Tampa Heights, just south of the intersection with Emily Avenue, heightening fears that the Russians are planning to invade Tampa and may already have operatives embedded in the area.

“It appears to be a recruiting poster,” said resident Claymatia Pierce. “It probably says something like, ‘JOIN AND STAND WITH US OR DIE CRYING AND ALONE, CRUSHED BENEATH THE HEEL OF OUR SHINY BOOTS’. But I don’t speak or read Russian, so I have no way of knowing.”

Her neighbor Sam Raybone said, “No, the word ‘plumbing’ is in English. It’s obviously a threat to attack us through our water supply! We should all stop brushing our teeth and flushing any toilets immediately. Of course, I don’t speak or read Russian so I don’t know exactly what it says but the malicious intent is obvious.”

While they disagree on what the sign is saying, both agree that with anxiety over aggressive Russian activity at an all-time high since at least the mid 1980’s, it just makes sense for everyone to be extremely alert and attuned to their surroundings.

“What are you talking about? It’s just an ad for a plumbing company. It says ‘WE CAN FIX YOUR PLUMBING PROBLEMS’ What is wrong with you people?” said another resident, Catherine Glimper, who apparently speaks and reads Russian, which means it’s highly likely that she’s a Russian operative who should be doxed and kept under 24-hour surveillance.