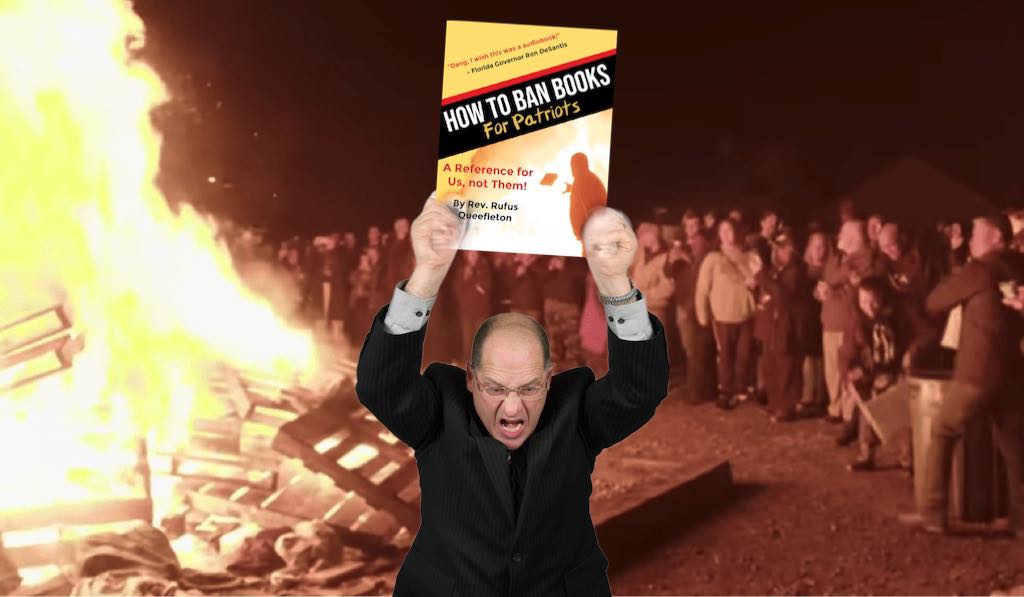 Reverend Rufus Queefleton of Sarasota is dismayed to learn that the book he recently published to help people learn how to ban books has been banned in libraries and public schools in Florida.

“I suppose there’s probably some ‘how to’ videos about it on YouTube,” he added. “But that doesn’t change the fact that the people who made this decision missed the whole point of the book itself! It’s almost like they censored it without even reading what it was about. At best, they came up with their own arbitrary, subjective opinion about the subject matter and determined that that opinion should be applied to everyone, regardless of any individual taste or preferences. Is that what we want from the people in charge of regulating our access to information? Yes, of course it is. Except not in this case.”

Betty Kirby of the Florida Department of Regulating Access to Information said, “Yeah, this was a tricky one. I have to admit we weren’t sure how to proceed with it at first. Ultimately we decided that since it’s a book and it mentions ‘books’ in the title, it’s probably very book-intensive so we should just play it safe and ban it.”

As far as Reverend Queefleton’s concern, Mrs. Kirby said, “Maybe he should look at it differently; I would think if someone is a proponent of banning books, having their book banned would be kind of an honor. It means the system works and that they’re an active part of that system now.”

“I never thought of it like that. Yeah, that’s pretty good! That does make me feel better,” said Reverend Queefleton, as he prepared for what he thought was supposed to be a book signing event to celebrate his new release but would actually turn out to be a book burning rally, during which every copy of his book would be destroyed.