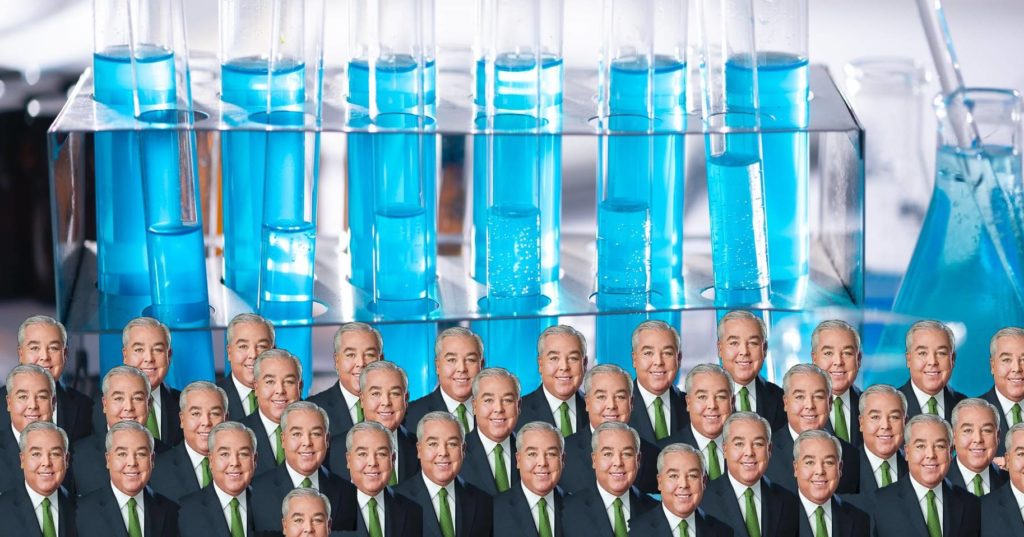 If you live in Tampa Bay, chances are that you’ve heard of Morgan & Morgan. The law firm announced today that it will be opening many more offices as their scientist son, Jeffrey Morgan has recently perfected a cloning technique.

Jeffrey is the lesser-known son of John and Ultima Morgan. Unlike his siblings who went to law school and joined the family business, Jeffrey went to medical school and has been studying cloning for years.

Jeffrey was busy in the lab and I wasn’t able to interview him but I did catch up with his parents John and Ultima Morgan of Morgan & Morgan. “You must be very proud of Jeffrey what an achievement!” I said. “We sure are proud. We had always hoped he’d find a way to join the firm. We could tell Jeffrey would be different from very young age. ” Said Mr. Morgan. “How so?” I inquired. “well we could tell that he was different from his siblings almost right away. our other two kids were chasing ambulances from the time they could crawl. But not Jeffrey he always had his head in a book.” Said Mr. Morgan. “He’s never been out for money. I never once saw him try to take from the offering plate at church. Unlike his siblings and his father.” Mrs. Morgan said with a chuckle.

“How is all this going to work? Who’s going to raise all the clones? Will you be looking for foster and adoptive parents?” I asked. “Oh heavens no. I can’t even begin to imagine the legal ramifications that would lead to. All of our clones are being grown to adults in the lab.” Mrs. Morgan stated. “Well that makes sense. Are all of these clones expected to attend law school?” I asked. “Jeffrey found a way to upload all of the knowledge they will need into their brains before we even wake them up. So basically, they’ll come out of stasis ready to sue the pants off anybody.” Mr. Morgan said proudly. “And at the rate we’re going we will have a law office on every corner in the next five years. You won’t be able to sneeze and somebody’s general direction without a lawsuit.” Mrs. Morgan stated “Wow that sounds terrifying” I replied. “Trust me you have nothing to worry about. Judging by your shoes and handbag you have little to lose. You can’t squeeze blood from a stone.” Said Mrs. Morgan. “Uhhh, thanks?” I replied holding back tears.

I then became distracted at a rattling door knob. “What’s behind the door” I asked. “Not to worry; sometimes our clones wake up a little early and get confused.” Said Mr. Morgan. Just then the rattling turned into pounding and the door came straight down. Out marched what looked like a hundred young John Morgans all covered in slime. I jumped up terrified of being trampled by this naked army of newly hatched lawyers. “Calm down.” Mr. Morgan said. “They won’t hurt you but if they do we’ve got plenty of lawyers on hand.” He continued. “Morgan & Morgan Morgan & Morgan Morgan & Morgan Morgan & Morgan” the army of clones said in unison. “For the people!” I yelled as I ran out the door in my cheap shoes, wondering if I should stop dropping acid with my morning coffee.