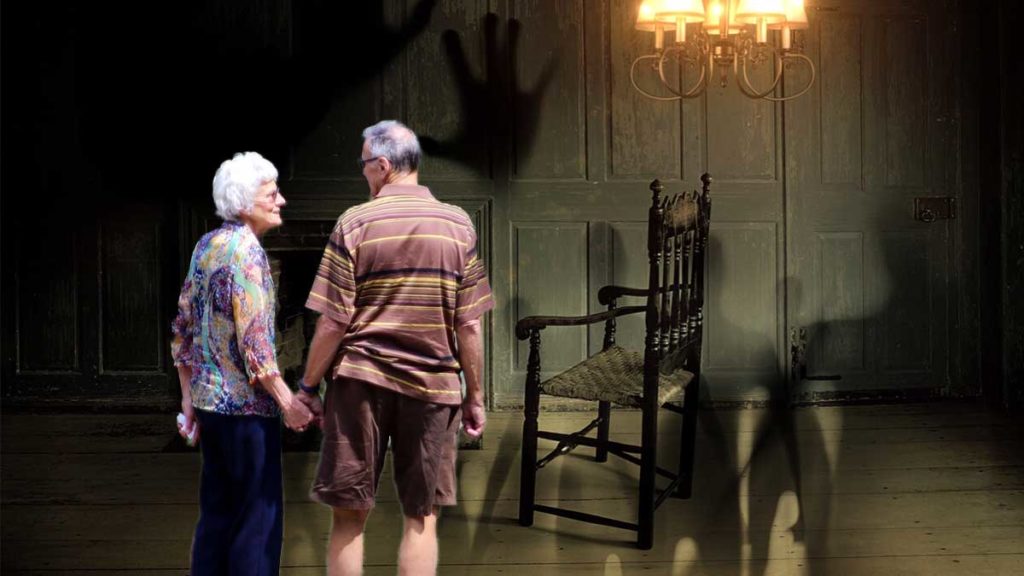 Some Tampa Bay area residents have been horrified to find out that they have been sending their senior citizen parents to live out the rest of their lives in a haunted house.

“This is completely unacceptable,” says Carolyn Moonstock of Oldsmar. “We love our parents. They’ve worked hard all their lives and shouldn’t be spending their golden years being terrified all the time. That was their existence when we were teenagers. Ha ha! I guess I you could say I was a pretty bad kid. I snuck out at night with boys to smoke cigarettes and drink malt liquor by the tennis courts at Bicentennial Park.”

Her brother Tim added, “Yeah, Carolyn slutted it up pretty hard in high school. But that’s not important. The point is had we known what this facility really was, aside from the really reasonable terms and conditions and monthly payments, we might have looked at casting them off to some other place. Probably.”

Carolyn chimed in again, saying, “Elders Care House is simply not living up to their own name.”

Fred Alberts, director of the facility in question, says he doesn’t understand the problem. “It’s right there in the name: Elder Scare House. I don’t know how anybody could possibly be confused by that. Wait. I see it now. Hmm, okay. That’s a problem.”

He said he and his staff were wondering why so many people were coming to their fright attraction and never leaving. “It’s the first haunted house of it’s kind, designed specifically for people 65 and up. It’s $10, which we think is a reasonable rate for people on fixed incomes, pensions and social security. It should take about 45 minutes to go through the whole thing, even for people with mobility issues. It wasn’t making sense that they wouldn’t come out for days at a time. Now it does. Huh. How about that?”

Elder Scare House/Elders Care House is located in an abandoned juvenile detention center on Hillsborough Avenue. Among the features of the haunted house geared towards elderly people is a recreation room where a black-and-white playing TV shows from the ‘70s are interrupted by commercials like this:

ANNOUNCER: Every day, hackers from foreign lands with dark skin are coming up with new ways to get into YOUR personal computer machine and steal pictures of YOUR grandchildren!

OLD LADY ACTOR: I took a computer class at the community center. Wouldn’t they just be downloading copies of those pictures, and I’d still have the original files?

Now that he’s aware of the situation, assisted living facility director and former Tilt-A-Whirl operator Alberts says he doesn’t see why his attraction can’t serve both functions. “Obviously, the people are comfortable enough living here. They seem to like it. I’ll get food for them. Burgers, pizza, soup, whatever they eat. And some of them look like skeletons so they make the place creepier just by hanging around. Win-win as far as I’m concerned!”