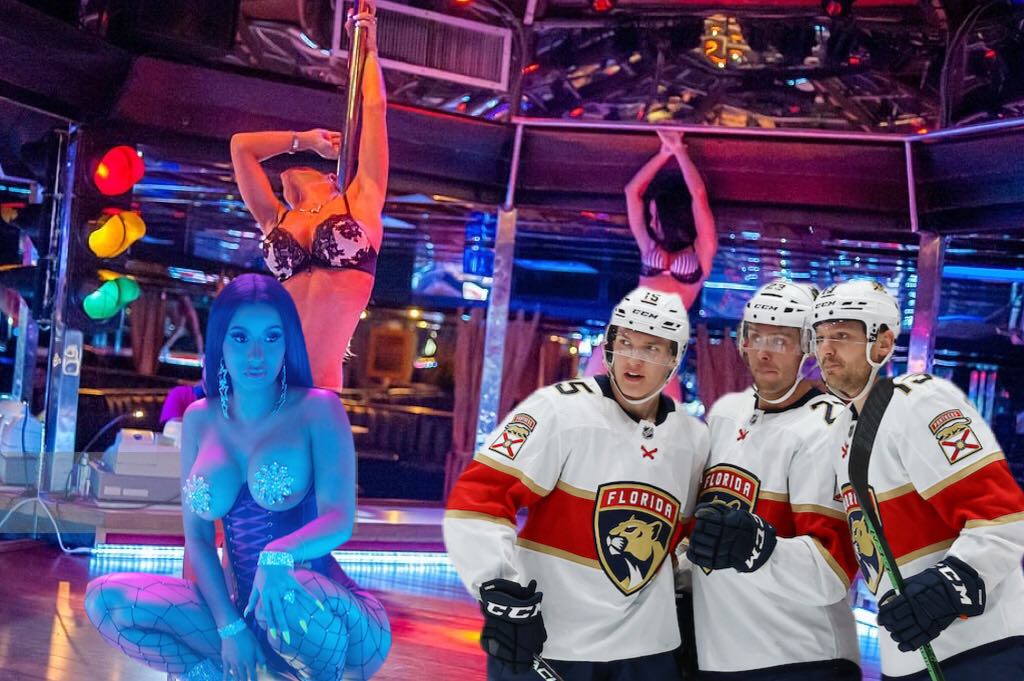 It has been reported by Pat Donovan and Aaron Jacobson of the Pat and Aaron Show on local radio stations 95.3 WDAE & AM 620, that several Florida Panthers players were out partying at a strip club on Sunday night following a 5-1 loss in Game 3 of their second-round Stanley Cup Playoff series to the Tampa Bay Lightning at Amalie Arena on Sunday, a series they would go on to lose the next night, getting shut out 2-0 to end their season, allowing the Lightning to advance to the third round of the postseason for the third straight season and seventh time in the last 11, having outscored the Panthers 13-3 in the series.

There are a lot of facts in the paragraph above; the claims of Donovan and Jacobson are not among them however.

This is a “news story” (I put quotes around it to indicate heavy sarcasm) that pops up every few years, usually coming from struggling radio shows or other mediocre media outlets in a sad attempt to draw attention to themselves. Heck, we here at Tampa News Force ran one of these shaggy sports team stories of our own last year, the difference being our story (notice the absence of quotes) was completely true because we’re awesome.

Even more than “Jeff Vinik is going to pay for building a new stadium for the Rays out of his own pocket” and “Bubba The Love Sponge is a human being”, “Sports Team at the Strip Club” is far and away Tampa Bay’s best urban legend.

A few years ago, it was Drew Bledsoe and the New England Patriots the night before a game against the Bucs. At other times, it’s been various baseball teams in town for an important series with the Rays and college football teams here for the Outback Bowl, and there’s never any credibility behind it, but it’s always lots of fun to talk about, isn’t it?

Donobson (that’s an acronym I created because I don’t have time to spell out Pat Donovan and Aaron Jacobson every single time) quote “a very good source”, saying it was “a lot” of Panthers players, except they’re not expressing sarcasm; they’re presenting this as “credible evidence” (THAT’S sarcasm).

Well, who? And who? And for that matter, whom? How come there are no pictures? And don’t try to tell me you can’t take pictures inside the Mons; I’ve been there many times and I know firsthand if you put the right money in the right person’s hand, you can do anything you want in there, including taking pictures. And by that, I’m referring to tawdry things of a sexual nature, in case you couldn’t guess.

Let’s suspend disbelief and accept the highly unlikely supposition that this source saw a lot of professional hockey players at a popular night spot place but literally nobody else has come forth to offer even a “yup” in support. Beyond that, even if Jacovan was presenting credible evidence that this actually happened and wasn’t just retelling a popular local folk tale, allegorical fable, parable, wives-tale, WHO CARES???

Do we really expect professional athletes to be in bed by 9pm before a big game because an absence of moral turpitude leads to high moral character which always results in victory?
Is it difficult to imagine that a team down 3-0 in a playoff series might go out for a night on the town (‘the town’ in this case means ‘the strippers’) as a means of relieving stress and/or changing their routine?
Would anything they did that night stave off the inevitability of getting shut out by Andrei Vasilevskiy in an elimination game?
Has it occurred to anyone that it wouldn’t have mattered if the Panthers had spent the night before Game 4 at a church BECAUSE THE LIGHTNING ARE REALLY GOOD?!?

As much fun as this obviously fictional, fanciful yarn is to share every time some DonJacobvanson regurgitates it, we as a community have to be vigilant in not giving it more credence than it deserves. Not when we’re faced with serious real problems like the chupacabras who come out of the sewers at night to feast on the elderly of Pinellas County.