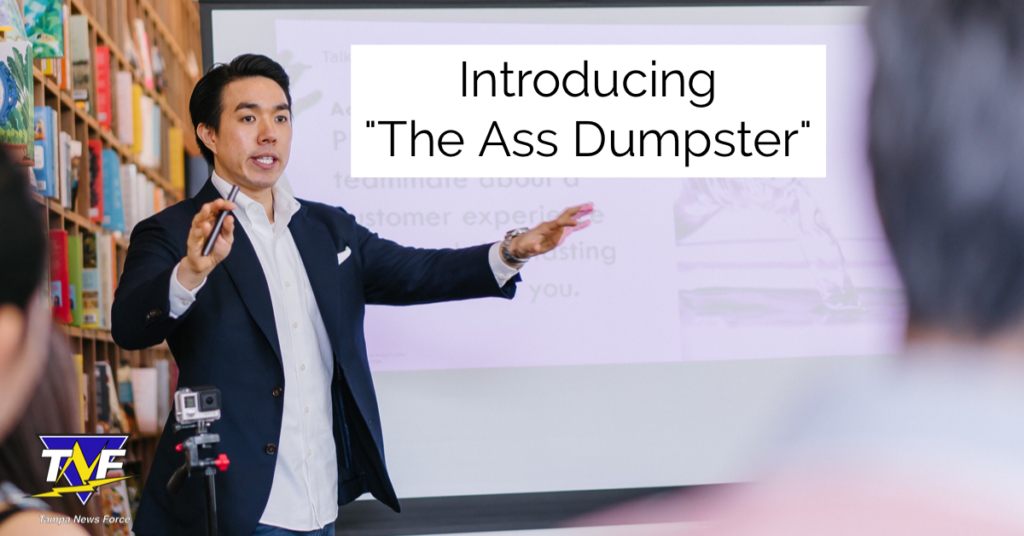 “It’s called the Ass Dumpster,” says Doug Pflug, a self-educated engineer. “I will now take questions from the press.”

The device was introduced at a press conference held at the Vinoy Renaissance Resort & Golf Club for media from all platforms, of which I was the only one in attendance. This made it difficult to not ask questions because I always try to be polite.

“So what even is this thing?” I asked in a disappointingly less polite manner than I would normally exercise.

He responded, “I’m glad you asked,” with a smile. We stood there awkwardly for nearly 15 minutes before he said, “Sorry, I rented the room for a whole hour. Did you try the hors d’oeuvres?” As he gestured toward an empty plate on the bar. “Apparently, food doesn’t automatically come with the room rental. I didn’t realize that. They should make that more clear. Although, ultimately it’s my fault for making the assumption. All I know is that any time I’ve ever attended an event like this, there’s been appetizers available. But I’ve never attended an event like this before, so how was I supposed to know? At any rate, lesson learned! I’ll know better next time. Also, there won’t be a next time. Spoiler alert!”

We stood there for another eight minutes before he continued, “The Ass Dumpster is designed for those situations where it’s necessary to throw your ass away. It’s like a trash can but specifically designed for asses.”

I was puzzled and he elaborated, “Such as when you have an especially messy bathroom episode, and you’re all, ‘there’s no way I’m going to be able to clean this up!’ Might as well throw that ass away.”

Against my better judgment, I asked, “You mean like an accident?”

“Sure, I suppose it could be an accident. Why not?” He went on to explain, “It’s like a trash can, but better, because you can put dirty asses in it. It’s sturdy and it has a lid that fits securely on top of it. Let’s be honest; it IS a trash can, but specifically for the proper disposal of one’s ass.” With that, he pointed to a standard trash can with a sticker on it that said ‘ASSES ONLY’. “I expect businesses to have these and keep them in their back alley and when someone drives by and says, that place smells like an ass dumpster, they can proudly say that it sure does!”

At this point, I declared that this was both the stupidest and most disgusting story I’d ever written and questioned why I was doing it. “Don’t ask me, I don’t even exist,” he said, as I went to hit the ‘DELETE’ button but pressed ‘SEND’ instead.