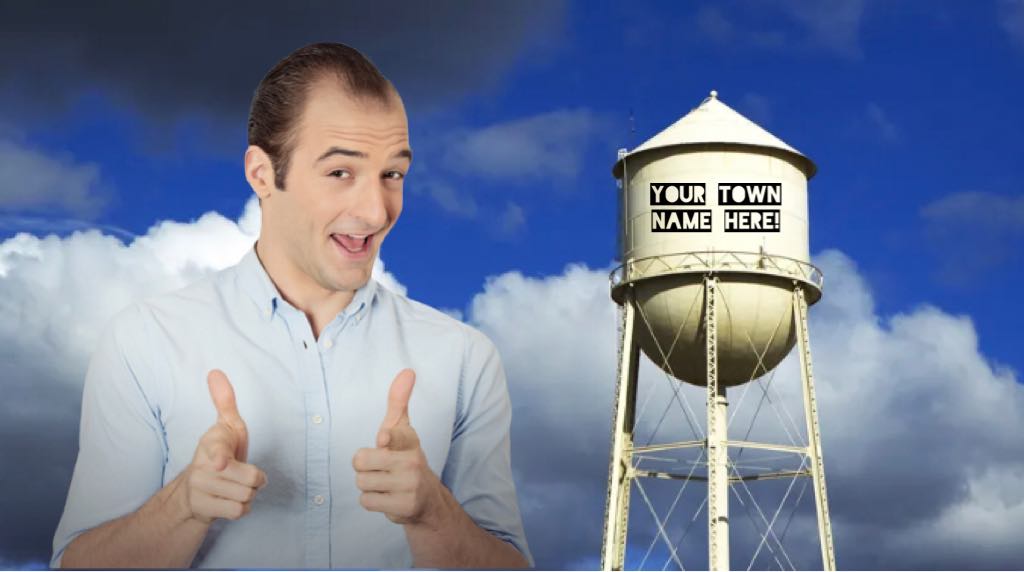 Mike Skleed of Clearwater has found it extremely difficult to make a living with his current career path, but hopes a recent bureaucratic error could finally be his chance to hit it big.

“I didn’t realize how tough this job would be when I signed up for it, but I should have figured that most towns have already had their own water towers for years and there aren’t that many new towns popping up anymore”, he said. “That’s right; I’m in water tower sales.”

Mr. Skleed works for TankCo, a company in Cheboygan, Michigan, that sells water towers to municipalities. “We don’t really do much of that these days. There was a time when that’s all we did, but that hasn’t been the case for quite a while”, said Dick Tank, the company’s owner and president. “We’ve transitioned to making tumblers and stuff. You know, hot drinks stay hot, cold stays cold. Much more lucrative. People love that! Mike is the only employee in the water tower division these days. We rarely hear from him and I honestly forget he exists until he shows up for a shareholders meeting or the annual holiday party.”

However, this happened recently:

BROOKSVILLE, Fla. (AP) — The city of Brooksville accidentally sold its water tower in a blundered real estate transaction.
A businessman purchased a municipal building underneath the city of Brooksville’s water tower last April for $55,000 with the goal of converting it into a gym.
When Bobby Read went to the county to get an address for his new business location, he was told the parcel he bought included the entire water tower site. Luckily for the town, Read was willing to give it back.
County records show he transferred the water tower back to Brooksville through a warranty deed last month.

“Everybody knows Brooksville is stupid, you know, as evidenced by how they so eagerly embrace their inherently racist heritage, but who would have guessed they’re stupid enough to sell their own water tower?”, said Skleed. “And sure, they got it back but if they’re stupid enough to sell it once, who’s to say they’re not stupid enough to do it again and maybe that person doesn’t give it back? Then they’ll have to buy another one. I’m going to try to get them to stock up. They should probably buy two or three of them, for their own good.”

He added, “This could be a great year for me!”