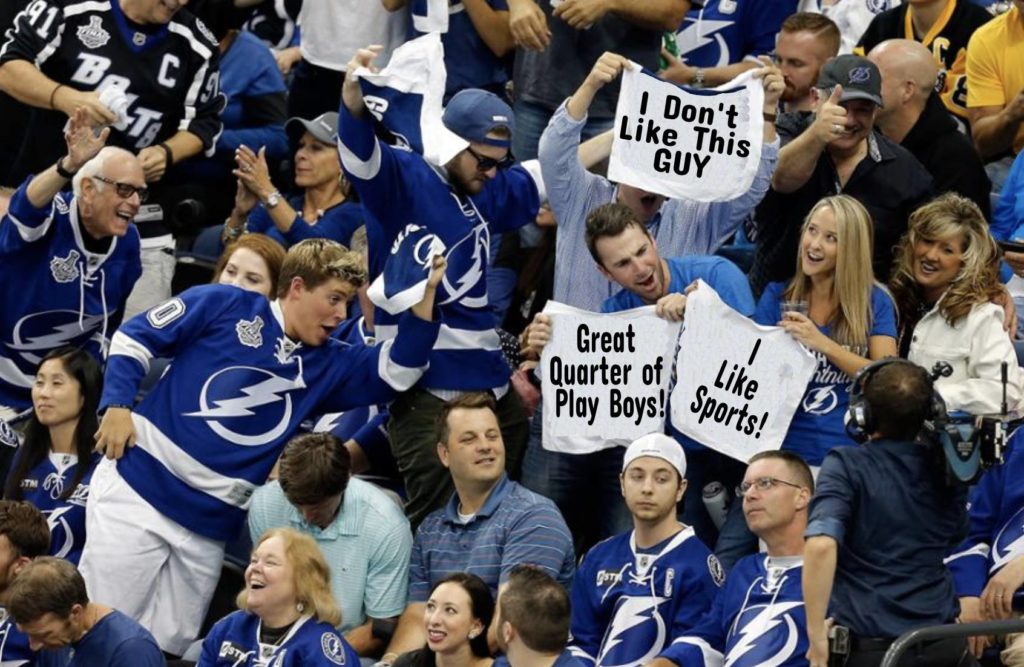 Don “Big Donny” Donaldson, a season ticket holder since the team’s inaugural season in 1992, still refers to the three periods of a hockey game as ‘quarters’.

“I guess it’s just a habit I can’t break”, says Donaldson. “It has nothing to with not understanding the game; I’m basically an expert at this point.”

A hockey game is comprised of three 20-minute periods, with intermissions in between, followed by a five-minute ‘sudden death’ overtime if the teams are tied at the end of the third period, and a ‘shootout’ if the teams remain tied after overtime. Football is a game consisting of four 15-minute quarters.

“Yes, football was number one for me for a long time – Go Noles! – but I’ve been a hockey fan ever since Tampa got a team”, says Donaldson who claims to know that icing and offsides are two different things and that defense in hockey is completely different than it is in football. “Victor Hedman wouldn’t be able to mount a pass rush for shit and I sincerely doubt Warren Sapp can even skate backwards”, he says.

But the timekeeping still throws him, even though both games are clocked at a total of an hour in regulation game play. “Quarters just make more sense to me, I guess. ‘Cause there’s four of ‘em. Even numbers of things are cleaner and easier to keep track of. Odd numbers seem… foreign and weird or something. I’m not comfortable with it.”

“It’s not a surprise; Big Donny’s kind of an idiot”, says Ray Shluffer who has seats right behind Donaldson in section 304. “He’s been coming to games for over 25 years and still refers to intermissions as ‘half time’, even though there are two of them. Did he give you his Victor Hedman/Warren Sapp comparison? So stupid.”

Will Billson, another season ticket holder in 304 isn’t surprised to hear Donaldson refer to the game’s timekeeping structure as ‘foreign’. “He’s not exactly multi-cultural, if you know what I mean. The guy pretty much refuses to pronounce French-Canadian players names correctly. He still refers to Patrick Roy as ‘Patrick Roy’. I bet he asks for lettuce and tomato on a Cuban sandwich.”

“Where’d he even get the name ‘Big Donny anyway? He’s 5’6”! I bet he’s the one who started calling himself that,” theorizes Billson.

Donaldson objects to those criticisms. “Screw both those jerks; I’ve been Big Donny since I played football at Gaither. And I know all the words to ‘O Canada’. In English only, though.”