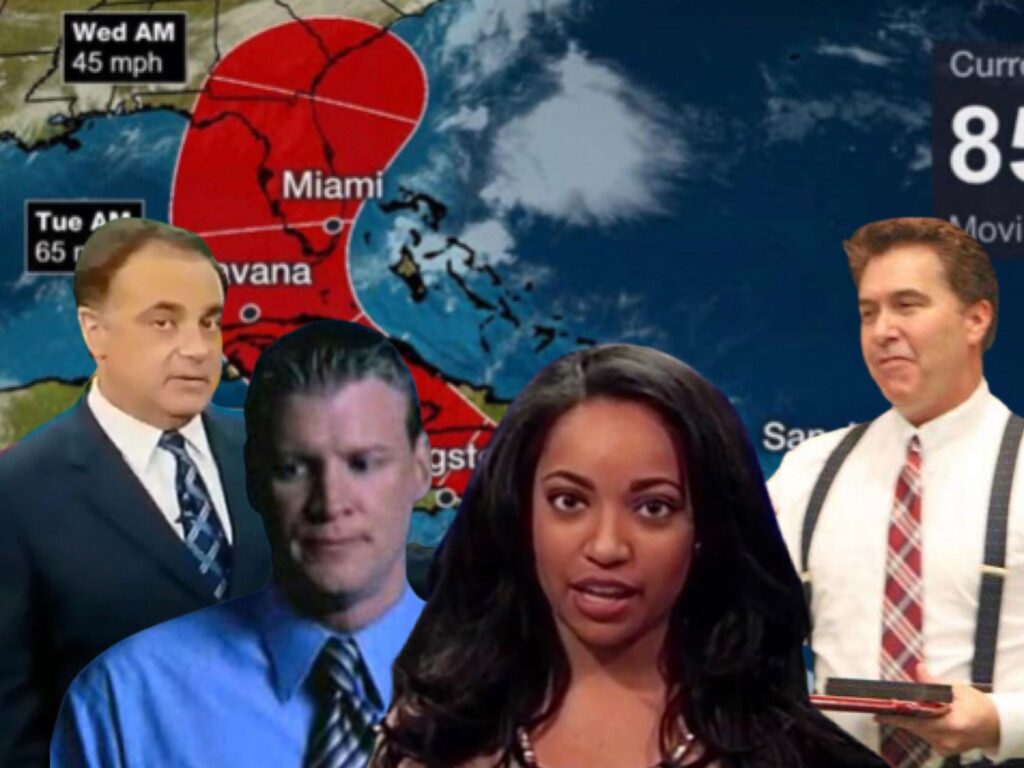 Tampa Bay’s television meteorologists are joining together to sue Tropical Storm Elsa, which recently passed through the area.

The class action suit, brought by WTVT’s Paul Dellegatto, WFLA’s Steve Jerve, WTSP’s Autumn Robertson and WFTS’s Denis Phillips claims that Elsa has damaged their professional credibility and has severely hampered their ability to perform their duties as meteorologists.

“There’s no question that residents of the Tampa Bay Area have become dangerously complacent, because storms seem to pass us by for the most part. But the threat of severe weather is always a very real possibility. We spend so much time and effort, trying to get viewers to take caution when these storms roll through”, said Dellagatto. “Then Elsa comes along and does less damage than a standard summer afternoon shower and we end up looking like bitches.”

“It’s hard enough to get people to take us seriously as it is”, said Phillips. “I mean, come on; I’m wearing suspenders.”

“This isn’t the first storm that’s looked like it was going to be a legitimate threat to life and property, and turned out to be significantly less than that”, said Jerve. “But enough is enough. I went to Jackson State University, for heck’s sake!”

“It’s so frustrating”, said Robertson. “We work around the clock, analyzing all the data and issuing timely reports, all in an effort to keep people safe. Meanwhile, they’re having parties and posting pictures the next day of tipped-over patio furniture, captioned, ‘CHECK OUT THIS STORM DAMAGE. LOL’. One of these days, we ARE going to get hit, people won’t be prepared and who will they be mad at? Us.”

The group is seeking damages in the amount of eleven billion dollars worth of Bitcoin or other non-fungible currency and they’re represented by bus bench lawyer John Morgan, who said, “If there’s anybody who knows about obnoxious blowhards, it’s me. Morgan & Morgan; For The Weatherpeople!”