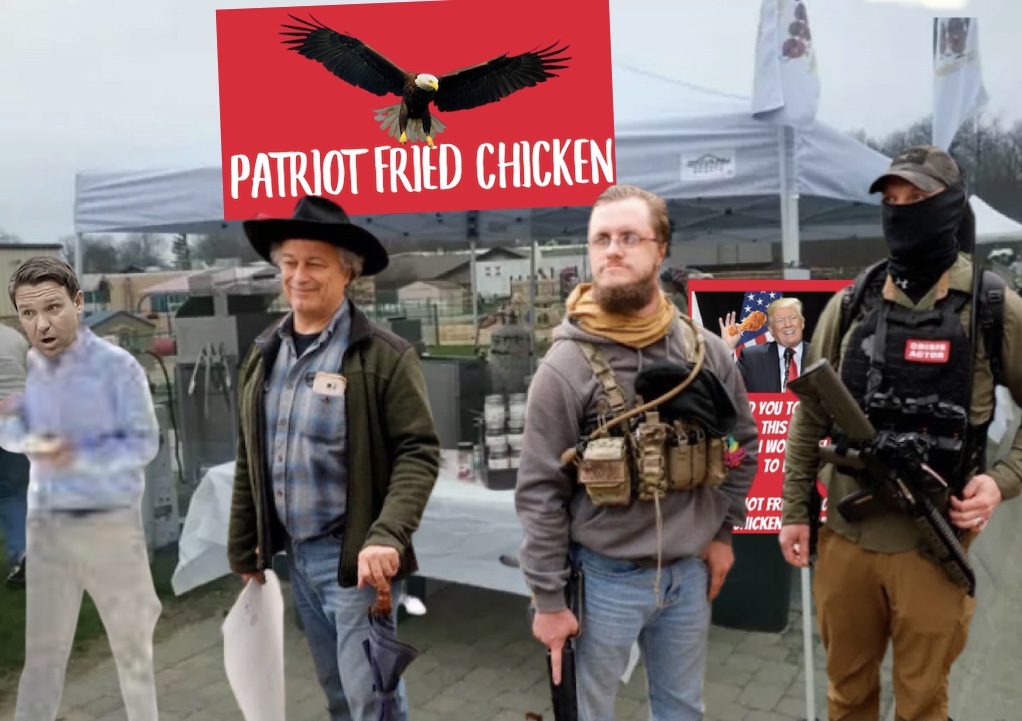 Monica Whitlock, an event concessionaire from Tampa, loaded up her tent, fryers and various supplies last night and headed to the state capitol building in Tallahassee in anticipation of a demonstration by angry, armed and hungry protestors today.

“We got here and set up around 5:30 this morning, figuring we’d need to be here early to get a good spot”, she said. “It only takes about 20 minutes to get everything up and running and then we have hot food to serve shortly after that. As soon as we put the sign up this morning we had a line! I couldn’t be busier if I was selling PS5’s for half price. Disrupting the democratic process is hungry work.”

Whitlock specializes in selling her food at protests and insurrections. “I always do pretty well, but I’ve been really busy since the summer!”, she said. She changes the name on her tent, depending on the nature of the events and those likely to be in attendance. “Today, I’m Patriot Fried Chicken. At previous events, I’ve been Fried Chicken Lives Matter, ANTIFried Chicken and It’s a Fried Chicken, Not A Choice.”

She added, “Trump may not be offering any concessions today but I am! As long as my supplies hold out, at least. At this rate, I could be sold out and headed home to Tampa before Biden even takes the oath of office. That would be ideal because that’s when the shooting will probably start. I always say, ‘just let me make my nut, not get shot in the gut’.”

One of the protesters on hand, who spoke to us anonymously because he mistakenly thinks this is the only thing that could get him fired said, “For me, it was that sign”, referring to a poster of Donald Trump encouraging people to eat Whitlock’s Patriot Fried Chicken. “I saw that and that was all I needed to know. When My President says to do something, I do it!” Whitlock said, “President Trump didn’t explicitly endorse me or my food, just like he didn’t explicitly tell a mob to violently siege the US capitol building.”

“The media would have you believe that civil unrest and hostility between opposing political orientations and sociological philosophies is bad for America,” Whitlock said. “That’s just another example of how the mainstream media lies to the public because this has been an absolute gold mine for me!”

“People are hungry for justice”, she said. “Luckily for me, they’re also hungry for chicken.”