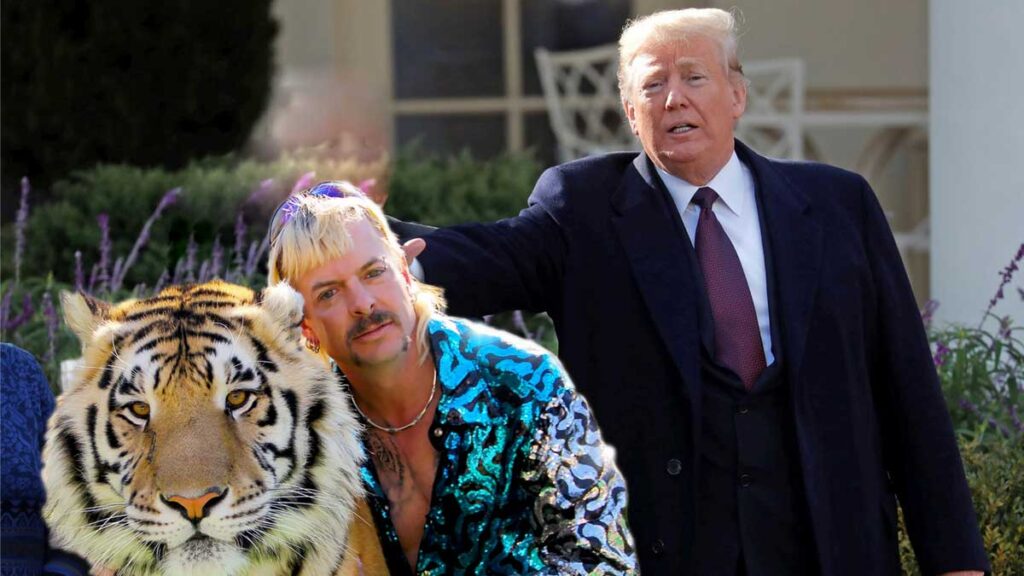 After much deliberation from President Trump’s team during its final hours in power, a final list of pardons has been released and includes many familiar names.

“We want everyone to know that we take these issues very seriously and everyone that is being released today, we feel has served their sentence for the crimes they may or may not have committed,” said President Trump’s Temporary Legal Manager, Chapman Alfonso.

Joe Exotic, famous for his role in the Netflix Documentary “Tiger King” in which the gay gun-toting polyamorous tiger zoo operator was arrested for trying to have Tampa’s Big Cat Rescues’ Carole Baskin, murdered.

“We have decided to let him go free,” said Alfonso. “Along with many others including Bill Cosby, Harvey Weinstein, Jared Fogle, Suge Knight, Kodak Black, R. Kelly, and Ghislaine Maxwell.”

Alfonso then checked his phone.

“I know many of you crazy left wingers wanted someone like Edward Snowden or Julian Assange to be freed but this is the best we can do,” said Alfonso who was then informed that he was being replaced by a new Temporary Legal Manager named Schector Fullafa.

“Thanks everybody for attending this press conference, at this time I would like to announce that my former colleague Chapman Alfonso has been removed from his position and will receive a pre-emptive pardon for his role in exchanging pardons for large campaign contributions,” said Fullafa. “We thank you all for coming out today and please stick around, Bill Cosby is here and he will be performing his new set so I hope you can all stay for that.”

Many of the press people in attendance with me checked our watches and realized this was probably as good as the story was going to get.

We thanked Fullafa for his time and everyone went out to Wing House.

At the table, the seasoned journalist and I shared wings and reflected on the past couple of years.

“Man, what a crazy ride it has been,” said Davis Legardo, as he dipped his already bitten chicken wing again into the communal dip.

“Legardo, what the hell!” I screamed, maskeless from across the table. “You’re double dipping!”

“Oh, come on, a little double dipping never hurt anyone.” Legardo said with a laugh.

But Legardo was wrong, he was an asymptotic carrier of the COVID-19 virus and he spread it to everyone at that table when he decided to double dip that wing.

Legardo is no longer with us, because he got a job remotely and decided to buy a van and travel around.

← Every Street in America to be Temporarily Named after Martin Luther King Jr. for 24 HoursTampa entrepreneur is having a very busy day in Tallahassee →