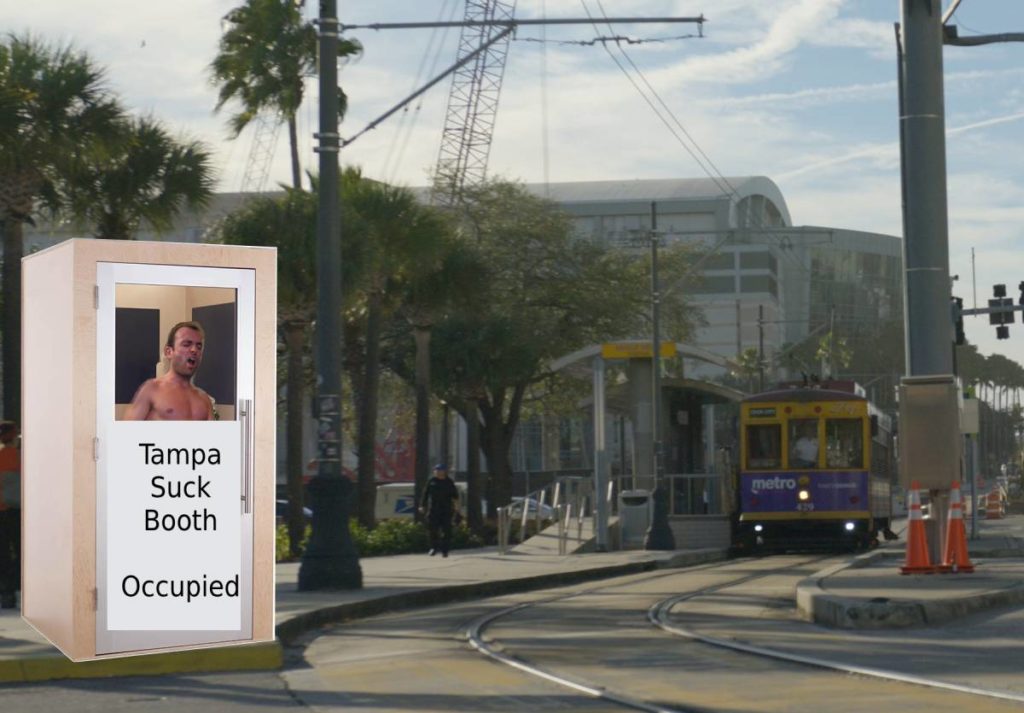 In a boldly sexual-progressive move, the city has moved forward with it’s bizarre proposal to install sexual-release, “suck booths” around the city, allowing users to “get off,” allowing them to release all sexual frustration at a moments notice.

“I don’t know.” Says city councilman, Nick Donnar, as he shrugs in confusion. “This one is hard to justify tax-payers money being used for sexually frustrated citizens to release their tension.” He mockingly does a masturbatory motion with his hands towards me. “Is that really our biggest issue? My child had to use food stamps to buy art supplies, does that make any sense to you? Because It doesn’t make sense to me. And I’m a city councilman!” He looks down at his name tag to make sure.

The booths will resemble old-time phone-booths with the windows blacked out. Patrons will place their bills into a slot, and based on how much they pay, will get 5-55 minutes of “release time.”

A series of vacuum tubes and latex suction nipples have been rigged together to create what would be considered a similar sensation to oral sex on the recipient. What started as a Reddit post, quickly picked up steam and went viral, causing the consideration of this project by the city chairman.

The original post from Reddit user, “PercocetKing69” Read: “Yo, they should install suck booths in the city where you can just go in and get like sucked off by a robot or something so you can be chill and not have to fight with your girl over some dumb s**t.”
When reached for comment, PercocetKing69 messaged back, “Yo, can you believe that s**t! I can’t believe this is about to be a real thing! The internet is power yo! Free Tay-K!”
What’s most controversial about this new installment however, is not its sexually explicit nature, but the fact that it does not include a sexual-release mode for women. “I wanna come mother f***er!” Says Jessica Bells, quoting a popular Kanye West, Lil Pump song, “I Love it.”

“You’re really going to,” she points at me, “install booths around this city that get people off sexually, and you’re not going to install a setting for women? That’s the most sexist thing I’ve ever seen! And I work at a strip club!”

As far as why there won’t be a female release function installed in the suck booths, Japanese tech company Norugato Motors, which will be producing the booths responded with an official statement. “We were not given specifics for the booths. The framework was very basic and lacking in logistical functionality, therefore we did the best we can to fulfill the basic goal of the robot. To ‘suck.’”

Fifteen booths will be installed in the Downtown Tampa area, and more are planned to be installed along South Howard, Nebraska Ave, Dale Mabry, Kennedy, and Central Avenue in St. Pete.