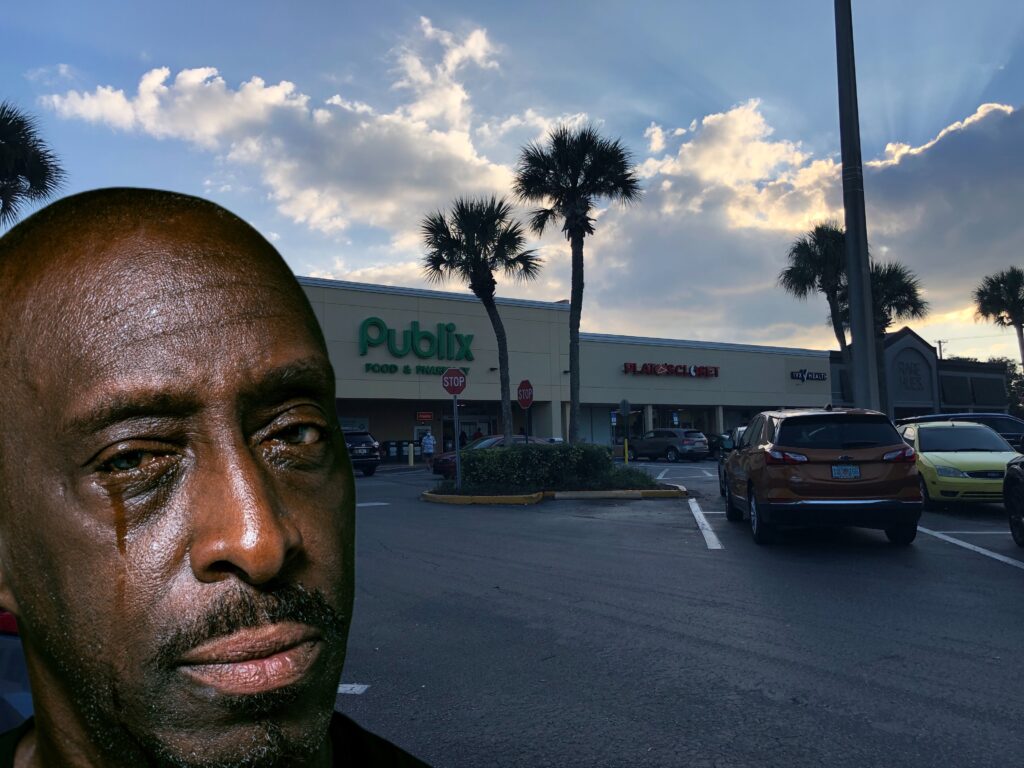 Keith Spinwell of Tampa is grieving a significant loss this morning, after having to finally leave the best parking space he’s ever had.

“I’m 53 and I’ve been driving since I got my license 37 years ago. I have never, ever gotten such a good spot”, he said, overcome with emotion.

He arrived at Carrollwood Center, the shopping plaza on north Dale Mabry at Lake Carroll Way, with the intent of picking up some items from Publix for a big family gathering at his home for Thanksgiving later this week. “You know, pretty standard stuff. Potatoes, stuffing mix and some cranberry sauce. That’s it. I figured I’d be in and out and since it wasn’t that much, it wouldn’t matter where I parked. Publix is always busy so I anticipated having to hike a ways”, he said.

As expected, the store was very busy and the parking lot was almost full. He said, “That’s when I saw the space; right up front. I couldn’t believe it!”

He approached cautiously, largely in disbelief at his find. “My first thought was it might be an accessible spot but there was no sign or blue paint. Then I looked for a sign designating it for other special needs vehicles: Instacart shoppers, pregnant moms, law enforcement, that kind of thing. But there were no signs of any kind. Then I questioned whether or not it was even a parking space at all because it just seemed too good to be true. But there was a white line on the passenger side and one of those concrete bumper things in front of it. I realized that I was completely in my right to claim it.”

He parked, got out of his car and noticed admiration and acknowledgement from others circling the lot in search of parking. “Lucky son of a bitch”, muttered Denise Brock, giving Spinwell a begrudging nod of the head as she looked for somewhere else to park her 2017 Honda Odyssey so she could pick up some juiceboxes prior to her 6-year-old daughter Kaleigh’s soccer tournament. “I’d have given my left tit for that spot, but that motherfucker got it fair and square. Nothing but respect”, she said as she loaded ‘The LEGO Movie 2’ into the minivan’s DVD player for Kayleigh.

Spinwell purchased his groceries and loaded them into his car but decided not to leave. “The space was just too good. It felt wasteful to leave it after a 15-minute shopping trip.”

He went into Plato’s Closet to look at brand-name gently used clothing, followed by a visit to RareHues, a store specializing in vintage furniture and home décor. “I don’t need any used clothes, furniture or home décor”, he said.

He decided that he was hungry and headed over to Tijuana Flats where he ordered the Dos Tacos (beef) platter with a side of queso (no guac). After enjoying his nice leisurely lunch, he saw the sign for the Zen Massage Center and figured, “While I’m here, in such a wonderful parking spot, I might as well center my chakras,” in spite of the fact that he was now at the other end of the shopping center from where his car was parked.

Then he opened accounts at the Florida West Coast Credit Union and T-Mobile. From there, he went to EVOS where he ordered a Green Mesa Chicken Bowl, with all-natural roasted chicken breast, natural bacon, chipotle crema, organic fire roasted corn, fresh hass avocado, brown rice & red quinoa blend, roasted baby kale & veggies with a Mango Passion Fruitshake. “I wasn’t even hungry”, he said. “I had just eaten tacos about half an hour earlier. I guess I was just trying to delay the inevitable.”

After that, he went to the barber shop by the laundromat and got a haircut and a shave. “I wish there had been a game or something on TV and that it had gone into overtime. No such luck though. Was I stalling? Well, I’m bald, so what do you think?”

That’s when his wife Deandra called, concerned. “Keith, honey? Where are you? Are you okay?”
“Yeah. Yeah, I’m okay. I’m having the time of my life, honestly.”
“Well, are you coming home any time soon?”
“Yes. I’m ready. It’s time.”
“Okay, well, then quit screwing around already.”

Spinwell trudged reluctantly toward his car, fighting back tears. “You always feel like you’ll have more time.” He got in, sighed, backed out and headed toward his home. In his rearview mirror, he saw someone in a Ford Focus pull into the spot and sobbed with anguish, “I will never forget you!”