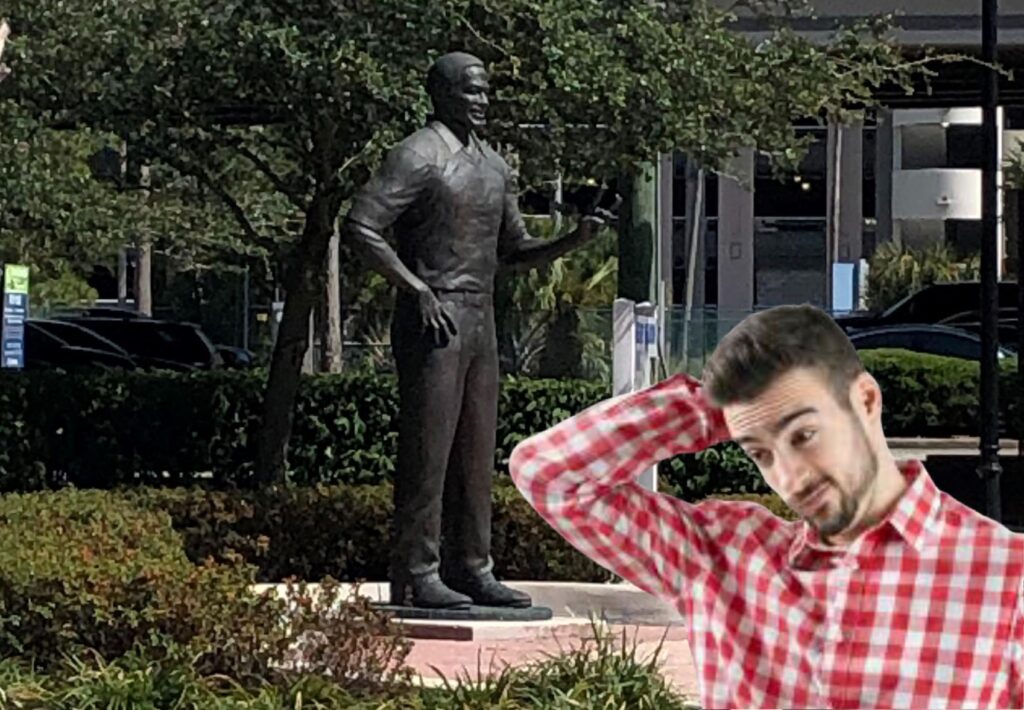 Ted Chiddleston of Seminole Heights is feeling highly embarrassed and ashamed of himself after making snide remarks about a statue in downtown Tampa.

He was traveling west on Brorein Street, heading toward Bayshore Boulevard when he stopped at a traffic light at the intersection of Florida Avenue. As he was waiting for the light to change, he noticed a statue on the southeast corner of the intersection.

“Look at that. A random statue of some random-ass dude stuck on a random corner”, he remarked to his girlfriend, Kaitlyn Schumacher who was riding in the passenger seat of his Honda Accord at the time. “And he’s wearing a sports jersey! That’s hilarious! Number 63? What a meaningless, arbitrary number. They couldn’t put him in a Brady or Lecavalier jersey, something meaningful to Tampa’s sports heritage? Nope! Just commemorating some unknown dude who likes sports by planting a statue in the middle of nowhere. That’s hilarious. Way to go Tampa. Typical!”

The statue he was mocking is of Lee Roy Selmon, the Tampa Bay Buccaneers first-ever draft choice, who also served as Athletic Director of the University of South Florida and is generally regarded as not only the most influential sports figure in the area’s history but also one of the kindest, most gracious and decent human beings to have ever lived here. He’s depicted wearing the number 63 jersey he wore during his Hall of Fame career with the Buccaneers, a number that became the first to be retired by the team. He was also the first player to be honored with induction into the franchise’s ‘Ring of Honor’.

“Well, now I feel like an idiot”, Chiddleston said upon learning the truth. “I’m from Tampa, born and raised. Of course I know who Lee Roy Selmon is and why he’s important. I just didn’t recognize the statue as him and thought it was an odd location to put any statue.”

The statue’s location was chosen for its proximity to the expressway which bears Lee Roy Selmon’s name and the USF Center for Advanced Medical Learning and Simulation (CAMLS) facility.

“Yeah, I know now. I get it”, said Chiddleston. “It makes perfect sense.”

Lee Roy Selmon died at age 56 due to complications from a stroke he suffered in 2011. Ted Chiddleston is an extraordinarily unaccomplished individual in his 30’s, who is unlikely to be remembered for anything, ever.

“Hey, come on! That’s pretty harsh”, Chiddleston said before sighing, “But I guess I can’t really dispute it.”