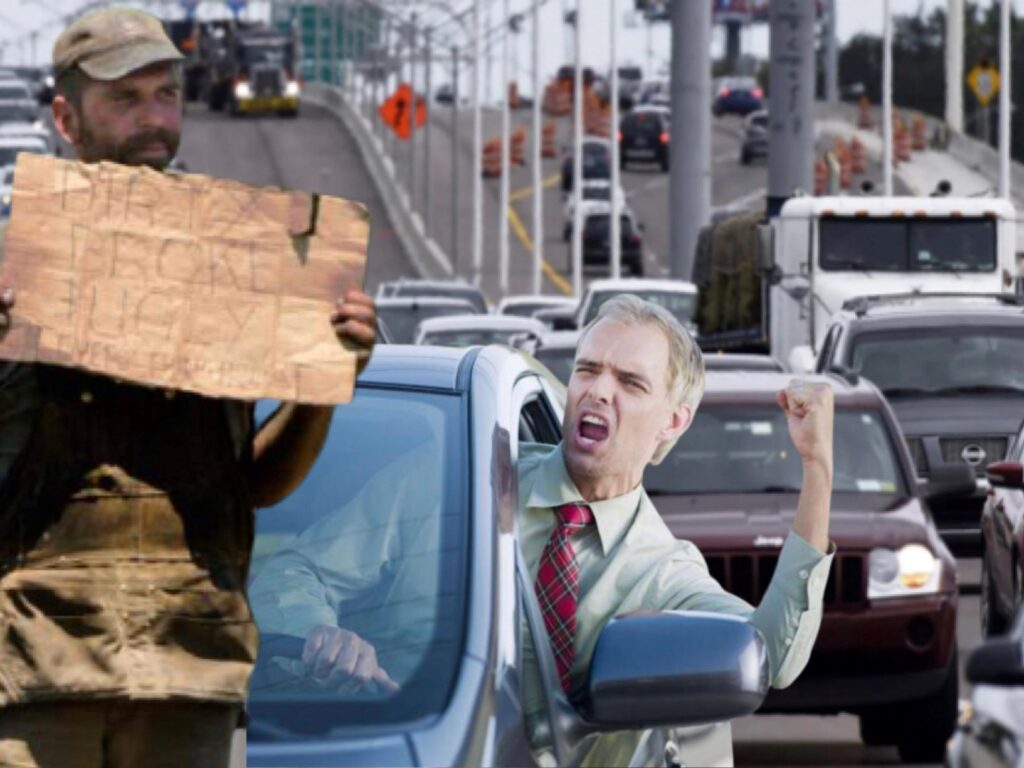 George Griley, a man whose name you don’t know because it’s not important to you but you may have seen panhandling near the intersection of Scott Street and Ashley Drive, just off the 275-N exit 44 ramp in downtown Tampa, recently didn’t bother Steve Wiglott, a Tampa businessman who was not in a mood to be bothered.

“After you’ve been doing this a while, you begin to recognize who is or is not approachable”, said Griley. “I mean, pretty much nobody ever wants to be approached, but some people really don’t want it. It was obvious from making cursory eye contact that this… what was his name? Steve? Yeah, he was one of them.”

Wiglott had a lot to do, was in a hurry and generally just did not want to be bothered that day. “That’s every day. I see that guy there all the time. It pisses me off and I’ve let him know before. Read the news; there’s lots and lots of great jobs out there right now. No reason to bother me with your problems”, Wiglott said. “And that’s what I was doing that day with my ‘don’t fuck with me’ steely glare. I do appreciate him saving me the trouble of rolling down my window to tell him to get the fuck away from my car, though. That probably saved me eight seconds that I didn’t have to waste.”

He added, “I’m surprised, though. Usually they’re relentless. Nice to see one of them not being a completely worthless piece of trash for a change.”

Griley, who is attempting to raise money for “don’t worry about it; that’s none of your goddamn business” said his intent is never to annoy people. “Look, I’m just trying to make money. I understand that people find that off-putting. I get it. If I were in their position, I’d probably feel the same way. But hello! I’m not in that position, so…”, he said. “If people say no to me, it’s fine. I don’t take that personally. They can just politely refuse. It doesn’t have to be some heated exchange of hostilities. You go your way, I’ll go mine. It’s cool. Somebody else will come through eventually.”

He then added, “Of course, as I’m going my way, if I remember you being an asshole to me and I see your car parked somewhere downtown, I will most definitely rub my naked dick all over your door handles. You might want to tell Steve to double up on the ol’ hand sanitizer.”