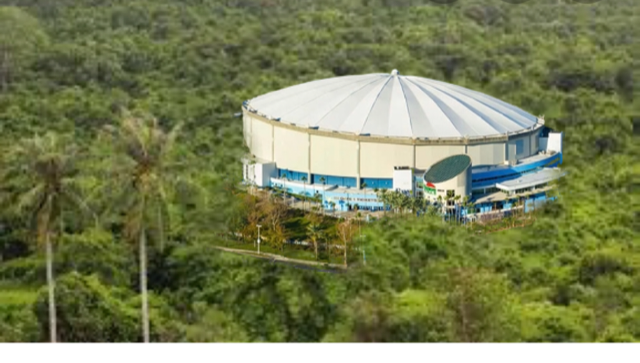 Fountain of Youth, Atlantis, Tropicana Field; Mythological destinations that have long been sought after by generations of explorers. Now, thanks to one such explorer, we rewrite the history books. Over the weekend the Legend of Tropicana Field has gone from gorilla in the mist to a pin on Waze, all thanks to Clive Raines.

It all happened at 2AM Friday when Raines was driving the wrong way down the interstate, and ended up getting off the on-ramp at the wrong exit. “I have done this for years, but construction and a handle of Fireball threw me off my usual path up down the emergency lane and I was forced to exit”, Raines said.

What he describes next is a flash of light, a wormhole skip, and a second big bang. Cops describe it as “spike strips under a drunk man’s tires”. Whatever the case, Clive looked up from his dashboard and through the Coors soaked windshield to a sight not seen by any Tampa Native in 15 years: Tropicana Field.

“I facetimed my wife to show her the field. I didn’t think anyone would believe me. Truthfully, I originally thought Greenwood Cemetery was the Trop, but then my wife spotted it on her screen just over my shoulder. In my defense. They both have the same active attendance.”

According to Raines, as he approached the gates he encountered several trials of the natives to determine his worthiness to enter the stands. Unannounced trolley cars tried to run him over, parking attendants attempted to drain his wallet, and Wade Boggs physically chased after him yelling obscenities about steroid users in the 90s.

“I finally made it into the stands,” Raines recalled. “Most of the people there were oblivious to the outside world. Several fans still had on Devil Rays gear and Bubba the Love Sponge shirts. I didn’t have the heart to tell them about either.”

Raines pinged his location for authorities to find him. Unfortunately for him the rescue took several days because authorities refused to believe that Tropicana Field could possibly be located in St. Pete. All this time explorers had been searching the wrong area.

Shirley Jefferson knows this reality all too well. In 2015 her she lost her husband to an expedition to find the field. Shirley recalls it fondly, “He didn’t die. He still works at Checkers down the street. I just left him when I he told me he was going to the game because he was a Yankees fan. He was dead to me at that point.”

Since the discovery, multiple return expeditions by curious archeologists have been made, none have succeeded. Players within the Field have cut it off from outside contact after it was discovered that Raines brought the natives COVID and that Kid Rock was inquiring about performing after a show. It may be decades before anyone finds the field again, but for the hopefuls out there we now know that it is no longer just another cornfield fantasy.

Devin Siebold is a Central Florida comedian and former winner of Mike Calta's Last Comic Stranded at Side Splitters.

View all posts by Devin Siebold →