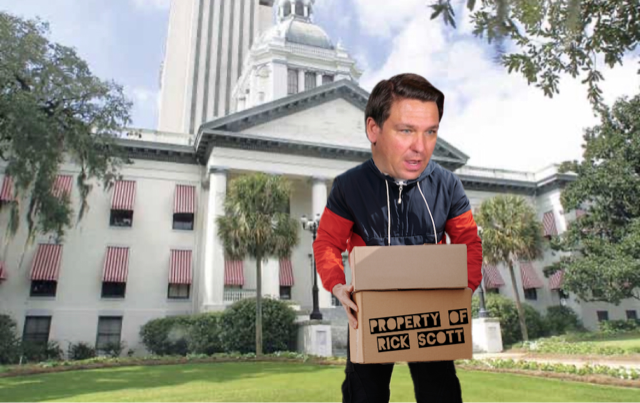 Florida Governor Ron DeSantis spent this morning packing up and removing a box of personal effects from his office at the state capitol building in Tallahassee, following remarks by President Donald Trump at a campaign stop in Ocala yesterday.

During the rally, Trump told the crowd, “He’s done a great job and he’s been my friend. Hey, Ron, are we going to win this state, please? You know if we don’t win it, I’m blaming the governor. I’ll fire him somehow. I’m going to fire him. I will find a way, anyway.”

“Well, that’s that, I guess”, DeSantis told onlooking members of the media as he loaded a box filled with legal pads, three-ring binders, some pens and an anatomically correct Rick Scott bobblehead with a Hitler mustache drawn on it with Sharpie into the back of a van parked in front of the capitol on Monroe Street.

When a reporter from CNN mentioned that the President doesn’t actually have the authority to fire a governor, DeSantis replied, “The thing that you lying idiots in the media fail to acknowledge and give due credit is the indisputable fact that this President, more than any President in history, always follows through on what he says he’s going to do. So if he says he’s going to fire me, then I am as good as out on my ass.”

A reporter from Fox News pointed out that the threat was contingent on the President not winning the state of Florida in the upcoming election, to which DeSantis responded by rolling his eyes, slamming the van’s back doors and pantomiming a solitary sex act while making a fart noise before jumping into the van and driving off.