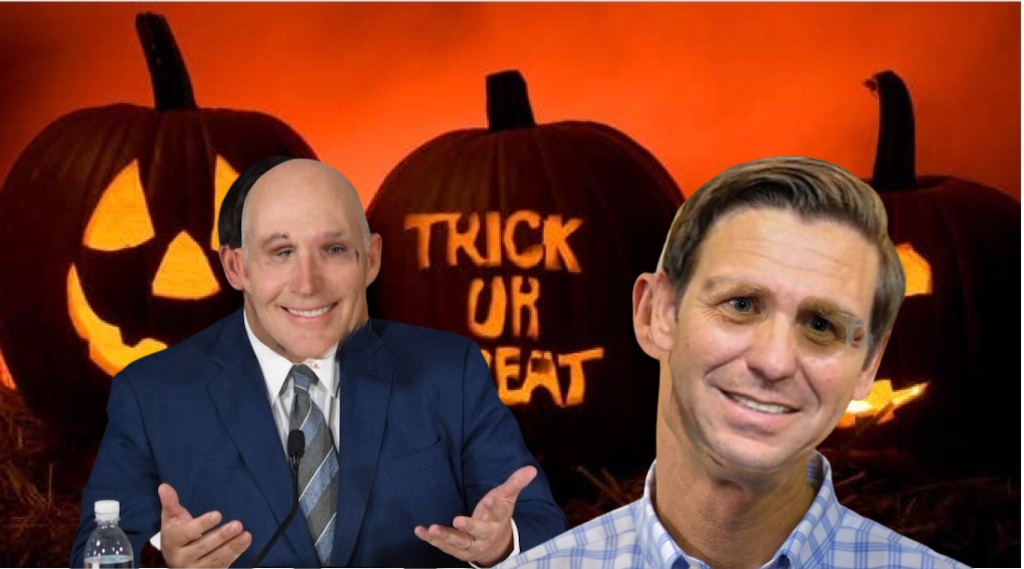 Former Florida Governor and current US Senator Rick Scott and his successor in Tallahassee Ron DeSantis have settled on their respective costumes for this year’s Federal Government Halloween Gala, which will be held at the Marriott Waterside in Tampa for the sake of this story.

The exclusive gala is the biggest Halloween costume party in the nation and is limited to elected officials and their significant others.

“I like scary costumes so I’m going as the scariest man in the world”, DeSantis said, as he put on a latex mask of Rick Scott and started lurching around the room like a zombie, dragging one leg. “Look at me! I’m a hideous, bald-headed, grinning ghoul intent on stealing your Medicare funds! What could possibly be worse? I can’t wait for the party! Man, I’m gonna scare the heck out of everybody!”

Meanwhile, in Washington Rick Scott, who tends to prefer comical costumes was trying on his Ron DeSantis mask. “Dar dar dar! Look everybody, I’m Ron DeSantis! I’m a huge dummy who makes important decisions like opening and closing the economy on a whim! Hurr Durr!”, he cackled as he staggered around the room in an exaggerated bowlegged gait while flailing his arms.

Neither knows the other’s Halloween plans, but aides for both are fully aware of the situation and preparing for the inevitable unpleasant confrontation at the party.

“Oh yeah, we know all about it”, says one administrative assistant who spoke to TNF anonymously. “Both staffs all got together on a Zoom conference to talk about how to handle it. We made the mutual decision to not let either of them in on it and just sit back and watch what happens. It should be hilarious!”