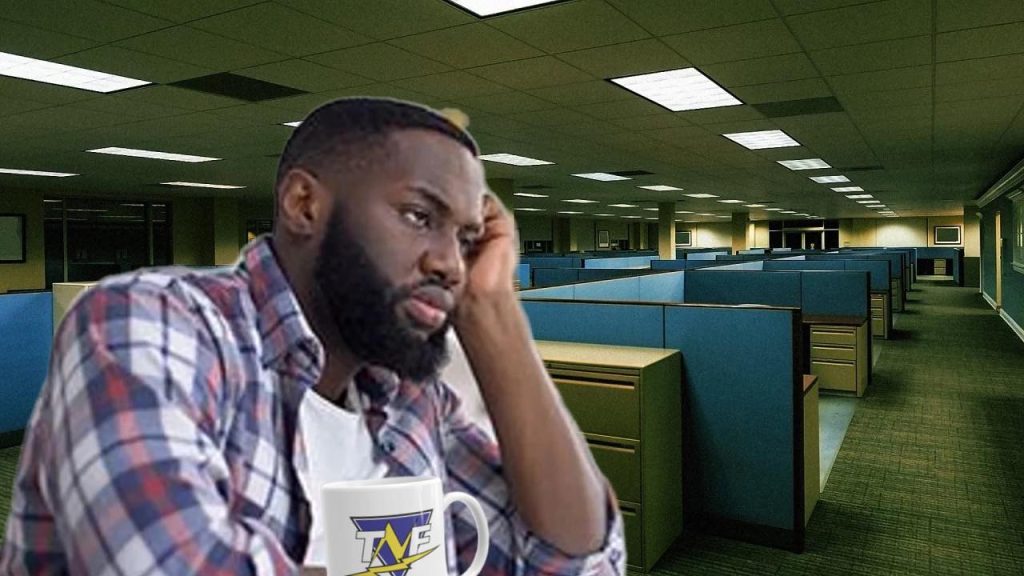 A full day after an unfortunate incident at his job, Ronald Robertson, a clerk at ClerkCo’s home office in downtown Tampa, was still feeling remorse to the point of being in a state of mild shock.

“I just can’t believe it,” he said. “I had my shot and I blew it. There’s no excuse and there’s no other way to look at it.”

“I blew it,” he repeated, shaking his head sadly.

The incident to which he’s referring occurred Friday around 5pm, the last work day of 2022.

“I’m kind of new here so I’m still trying to make a good impression. I was sitting at my desk because I hoped Ms. Harris, my supervisor, would see me and take notice that I hadn’t left early,” he said. “I was so fixated on that, I guess I forgot.”

“She walked down the hall, past my cubicle, smiled and nodded at me. Then she got in the elevator and went home… and I didn’t say, ‘SEE YOU NEXT YEAR’!” he said, breaking down and sobbing heavily.

“Do you understand? There’s exactly one small window every year when you can make that joke! It’s a guaranteed, slam-dunk, home run of a joke. AND I MISSED IT!!” he said. “Now she has no idea how funny I am! NOBODY’S going to know how funny I am!!”

“I do feel I need to get back on good graces with everyone here after the egg salad incident a couple of weeks ago. Everybody is still kind of upset about that,” he said. Asked if he ate a co-worker’s egg salad sandwich for lunch, he simply replied, “not exactly.”

It dawned on him what had happened and he got up and tried to chase Ms. Harris down before she got in her car to go home but it was too late.

“I saw her taillights disappear into the night and it sunk in, what I had done,” he said. “Rather, what I hadn’t done.”

He was so traumatized, he ended up sitting in his cubicle and staring into space until 2AM before trudging to his car and going home.

“It’s going to be a really long year,” he said sighing heavily.