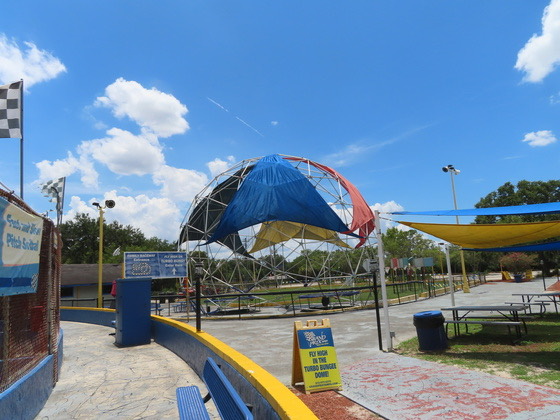 Yesterday, at an online auction intended to liquidate the asset inventory of the recently closed Tampa Grand Prix family fun center, we bought the geodesic dome structure shown in the photo accompanying this article. Also this photo:

“After we failed in our bid to purchase the old, used parade float from Tampa’s Bonney-Read Krewe, we felt bad about ourselves and really had this urge to buy something, so we bought this thing instead,” said Hal Gweeg, Tampa News Force Director of Purchasing Large Objects.

When asked what the venerable, completely legitimate and highly trusted local media outlet planned to do with the at least 20′ tall aluminum pipe structure with tattered scraps of colored material hanging from it, Gweeg said. “I don’t know. Sit under it? As long as it isn’t raining, I guess. Look at it and sigh sadly, knowing it’s not a parade float that looks like a pirate ship? I really don’t know. At the Grand Prix, I think they put trampolines under it, but we didn’t buy the trampolines, so that’s out.”

He added, “At one point, Josh said something like, ‘we can make our own parade float out of it!’ and John said, ‘how would that work?’ and Josh said, ‘it’s mostly round, so it will probably roll pretty good’. John agreed with that and then they both stopped talking about it. That was a half hour ago. We spent $154 to buy it and more than twice that to haul it out of there so now we own it. I asked if it would be cheaper if they took it apart and they said that would actually be more expensive. John pointed out that there’s no way we would be able to reassemble it ourselves, which is probably true. But it fell off the truck twice while we were hauling it down Nebraska Avenue, so I’m sure we’re going to get bills for the damage that caused too. I don’t know, this seems like a disaster so far. But we’ll figure something out. Or we won’t. Again, I just don’t know.”