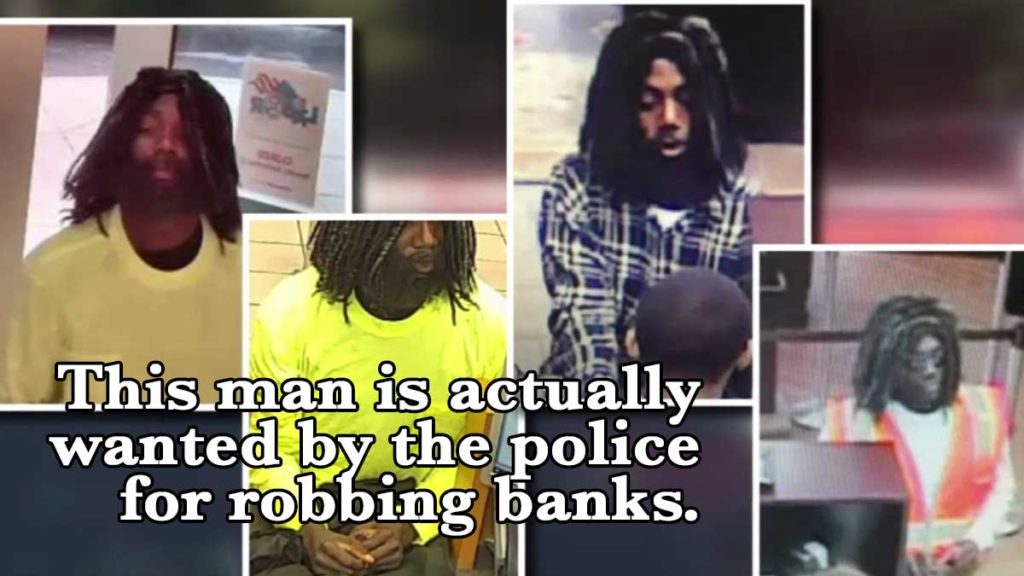 This past week, we shared a video about a bank robber who is still on the loose in the Tampa Bay area.

This man is still wanted by the police and the reward for information leading to his arrest is currently $35,000.  Since the video was published, police say the suspect shot and robbed a Brinks security truck driver who was refilling an ATM at a credit union.  Along with the Brinks security guy, another good samaritan who tried to stop the robber was shot but is expected to survive.

While we can’t confirm if the robber is wearing a fake wig or not, it does seem rather suspicious that he keeps going after credit unions.  Are credit unions easier to rob than banks?

To find out if they were, I recently disguised myself with a comically large wig and headed to the nearest credit union near me.  After slipping the teller a note that read: “This is a social experiment, I’m trying to see if it’s easy to rob banks, also my gun is fake.”

The teller looked at me weird and proceeded to hand me a bag of cash, even though I didn’t have an account with the credit union.

I casually walked out and headed to a nearby Baskin Robbins because it was in the same plaza.  Once inside the store, my wig had taken control of my body and I wondered if robbing an ice cream place would be as profitable as robbing a bank.

I slipped the same note I gave the teller to the teenager working the counter and he also gave me a funny look.

“This isn’t a bank,” the young man laughed.  “I can give you some free samples or something.”

I flashed my fake gun at him, causing him to laugh at me some more.

“Okay sir, I can give you like a small cup or something.” Said the young Baskin Robbins employee before giving me a big heaping scoop of chocolate. I walked out of there without paying.

Now, none of this is based in any science but I feel like if you were going to rob a bank, rob a real bank.  The big ones that deserve it, like Wells Fargo, Bank of America, Chase, etc.

Those are the real thieves, with all those unnecessary fees that only hurt the poor.  Maybe this credit union robber is a plant by the big banks to try and get more people to keep their money in the big banks instead of the smaller and locally owned credit unions.

That’s why no one is turning him in, because the big banks know who he is, and what is $35,000 to them anyway?  It’s not a life changing amount of money.  Sure it’d be nice if someone gave me even a fraction of that, but it’s not tip the police with information about a guy I suspect it is, money.

Also, why is it that when it’s a big crime like this, we ask citizens to profile one another? How about the police do their jobs?  I had a job once, I don’t anymore but I hope to again someday and that is why Tampa News Force needs your help.

Take our poll and let us know if you would like to see more videos like the bank robber one above.