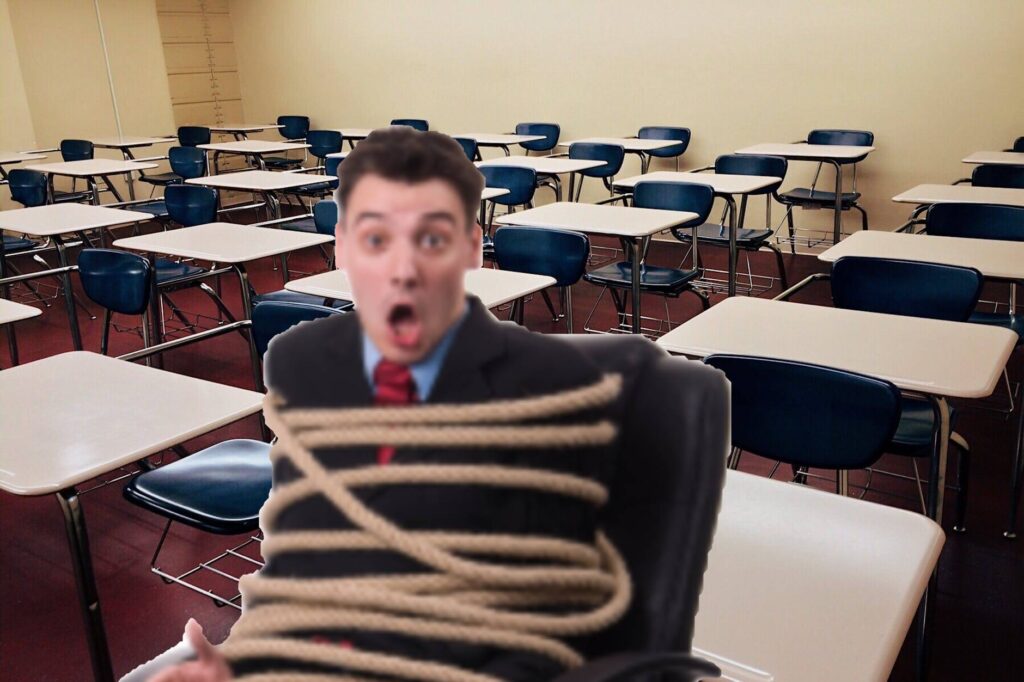 Hillsborough County police have entered a 3rd straight day of crisis negotiations with a collection of local Hillsborough school teachers who are refusing to return to work, should schools reopen. As of the time of this report, police are starting to feel like they are running out of options.

“We’ve tried nothing, and absolutely nothing worked!” said lead negotiator Phuck Yori Piñon. “I mean, they’re refusing to go back to work even though we’ve told them we’re going to cut their funding again! We’re just trying to get back to normal. The good news is that we’re thinking about using the Bunker Buster 20,000 to blow them out of their hole. This means we can order the Bunker Buster 30,000 next year from our surplus military supplier. I mean, it’s called ‘Use of excessive force’ so let’s USE it already” Dt. Ion said in a statement at the scene.

The teachers stormed the classrooms of PS 238 on Monday morning as Hillsborough county lawmakers were visiting to oversee the installation of classroom cages and the removal of windows from the teachers lounge. In the process they managed to capture a total of two lawmakers and three interns before holding up in a classroom on the 2nd floor. Using a flurry of textbooks and rulers, they managed to bludgeon a resource officer into submission before absconding with the school board members.

Mike Dont Wannabeme, head of the teachers union, released a statement on his FB account to the Police Department encapsulating their demands. TNF has managed to get ahold of a copy of the statement.

“We, the Teachers of Hillsborough County are sick and tired of this treatment! You don’t know what it’s like in there with those monsters! The shootings, the beatings, not to mention the lack of natural sunlight! And that’s only what happens to the teacher of the year! Is it so wrong to ask for some windows? Maybe some additional pay so that we can afford to eat something other than ramen and our own failed dreams every night? We are also demanding that the government consider halving the standard classroom size. We managed when you raised it to eighty kids per class. We dealt with it when you raised it another twenty more; but raising it once again to one hundred and twenty kids per class? This is just too much! We are demanding some serious change! Some loose change! Enough to get something out of the vending machine at least!”

With no end in sight, Tampa News Force will continue to monitor the situation.