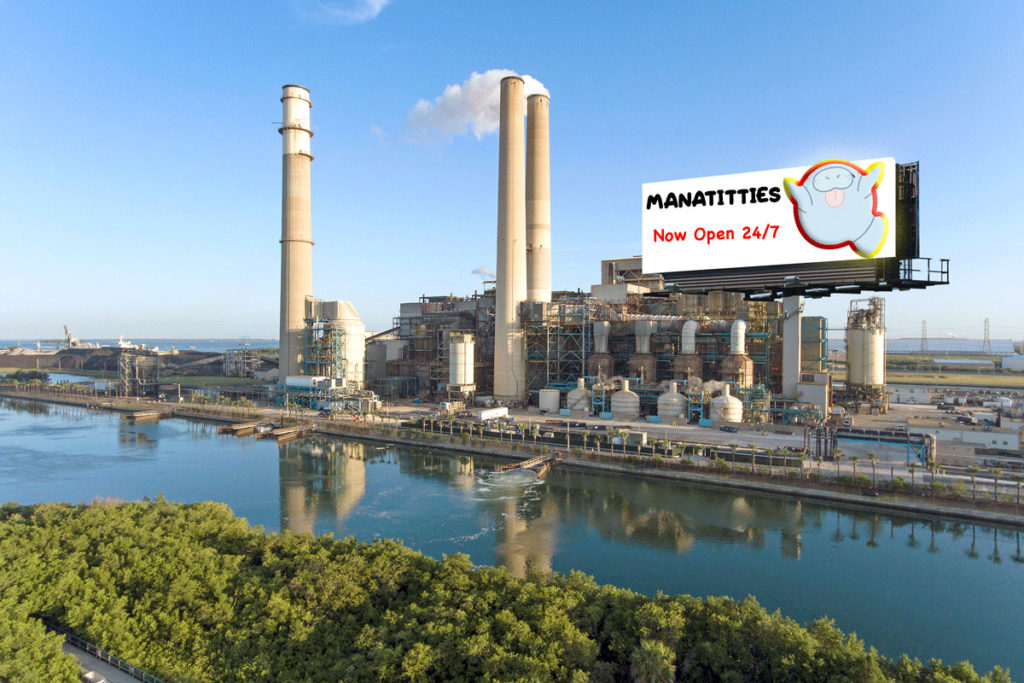 At the Tampa Electric Co’s Big Bend power facility, the manatees gather in the warm waters every winter, drawing crowds of spectators to view the majestic sea cows.

It was only a matter of time until someone decided to combine two great Tampa things: strip clubs and manatees.

“It was a natural progression for this city. We care deeply for these gentle giants, and we needed to raise money to support their conservation” said Phil Daly, the Public Information Officer for the facility.

He continued, “After consulting with the managers of the top gentlemen’s clubs in Tampa, we came up with the idea to custom make bikinis for the manatees out of Romaine lettuce and let visitors ‘tip’ the manatees to get them naked.”

The way the system works, according to TECO, the manatees will be clad in the lettuce swimwear. There will be a machine on the viewing platform that will accept coins and cash. Each time the machine collects $5, a bell underwater will ring. Like Pavlov’s dogs, the manatees will be trained to eat a piece of lettuce off another manatee’s bikini when they hear the bell ring.

This idea isn’t without opposition. Local community group Moms Against Animal Indecency released a statement that read, in part:

“The sexualization of animals needs to stop. Our last effort to criminalize dogs mating in public was a resounding success. If we were able to prevent our children from seeing dogs fuck on their way to school, we can prevent them from being exposed to nude manatees as well…the only good to come of TECO’s plan is proving the need for animals to be clothed. We find the open display of non-human genitalia and nipples to be extremely offensive and triggering to our sensitive theybies, and it must be stopped at all costs.”

We reached out to TECO management to see how financially successful this three-month-old project has been, but they did not return our request for comment.

I caught up with the night janitor who cleans up the viewing machines and asked him how business has been.

“It’s a modest living, I can’t complain,” said the janitor before he pointed at something behind me and screamed, “What the hell is that!”

The janitor then took off in a Lamborghini.

View all posts by Roger Nelson →