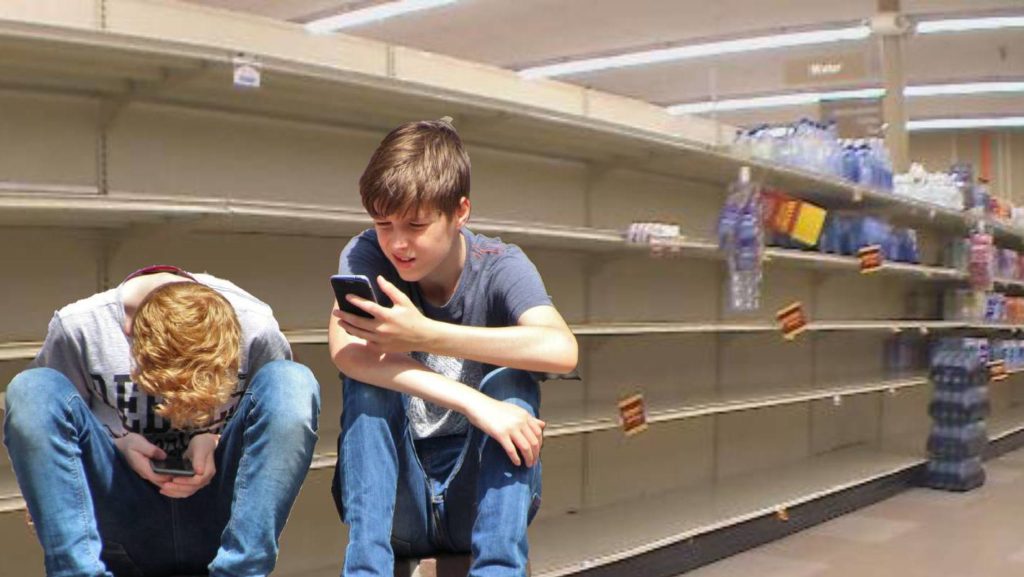 Two Chamberlain High School sophomores who are responsible for creating the recent trend of people hoarding toilet paper to protect themselves from catching the Coronavirus deeply regret their actions.

“The whole thing started a couple months ago, when only Chinese people were dying from Coronavirus and so it was still funny”, says Didswell. “We’re pretty much the funniest guys in school, so it’s kind of expected that we would do something topical and hilarious”. “Yeah, we wanted to get in on the comedy so we posted a thread on 4Chan. We never thought people would read it. Nobody out in the actual world reads our posts. It was mainly to make me and Chad and our friends laugh”, says Qug.

The thread, since removed but not before being forwarded enough to make an impact, read as follows:
“Good afternoon, this is your government speaking. As you may be aware, the Cronoavirus (sic) is killing all the Chinese. Unfortunately, there is also bad news: and that is that this deadly virus is also definitely coming to the USA and will try to kill Americans too. Our top scientists have learned that the disease is either already up your butt or it will be up your butt very soon and the only way to not die screaming in the street like a Chinese is to keep your butt as empty as possible. Yes, this means pooping at least 11 times a day. That means you should make plans to spend a lot of time on the toilet and a lot of that time wiping your butt. if you know what’s good for you. So we’re telling you that you need to go out and buy all the toilet paper you can. Every single roll. To literally save your ass. Don’t worry about other people and whether or not they have any toilet paper. That’s their problem, not yours. So do it, do it today, poop your brains out to defeat the Chinese Disease!!!!!!!!!
Sincerely,
Your Government: Out
USA USA USA”

Stifling giggles, Qug says, “Hearing it back aloud, it sounds kinda racist. That’s another thing we regret.” “Ah so,” replied Didswell, causing both of them to collapse into hysterics.

The post also included a video, presumably shot by Qug, of Didswell in a suit and tie, wearing a name tag that said ‘Hello My Name Is Penisdent Trump’, flushing a full roll of toilet paper down a toilet and causing it to overflow, but apparently everyone ignored that.

Reports have been coming in for the last few days from all over the country that retailers everywhere are selling out of toilet paper, with shoppers camping out overnight to be the first in line when stores open each morning. One of these shoppers, Brenda Hindwhistle of Temple Terrace, slept in front of her local Publix last night. “I saw a notice from the government on the internet. You’d better believe I took it seriously!”, she said. I asked if she ever considered that it might be a hoax, she replied, “Uh, hello? I’m not an idiot. The message was signed ‘USA USA USA’ and that ain’t no joke.”

“That’s awesome!”, cried Didswell in delight before quickly adapting to a more somber demeanor. “But, um (ahem) terrible. Again, we’re very sorry.” Qug added, attempting in vain to suppress yet another wave of giggles, “Yeah, we legit honestly feel bad about it. Especially for the people who now can’t wipe their butts. Somebody’s probably gonna get really sick because of that.”