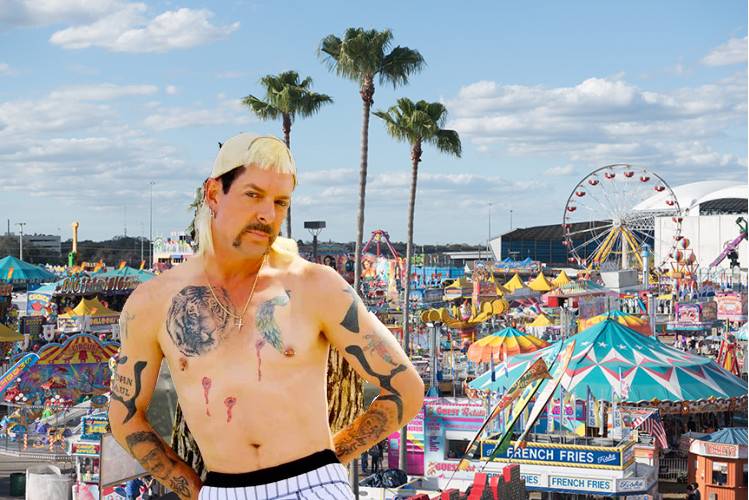 A Tiger King themed attraction is currently being constructed on the fair grounds next to the Seminole Hard Rock Casino, capitalizing on the documentaries current popularity. The theme park, which is expected to contain live tigers and “do it yourself meat grinder” booths, will open the day the quarantine is lifted, “whenever that may be,” said Dedrick Williams Hampton III.

“We have all the things from the movie, and we put them together all sprawled throughout the fair grounds, and there me even be some loose tigers, but we have people sign waivers up front, so we’re not really responsible for whatever happens, and we think the fans appreciate that kind of authenticity.” Williams Hampton III said.

The vaguely roped off area which will be titled, “Tiger King World” will have an entrance fee of $35 and will come with a bucket of tiger food, for park-goers to use as they wish.

“I can’t do anything except sit at home and watch stuff on TV so I’ve really put a lot of my attention into this film! Memes, posts on social media, statuses, any outreach I have is going towards promotion of this film. I just love it so much! So tantalizing!” Windsmoore shouted through his computer screen

In fact, I’ve started smoking meth and having gay sex! I even got the cool haircut the main guy has!” Windsmoore turned his head to reveal an unconventional haircut with bright color streaks.

“Isn’t this interesting” He yelled.

Then a loud message appeared on the computer, “SHUT DOWN COMPUTERS NOW, THE VIRUS CAN BE TRANSFERRED THROUGH THE SCREEN COMPUTER SELF DESTRUCTING IN AN ATTEMPT TO BURN THE VIRUS PARTICLES”

Then my laptop caught on fire on my lap, causing me to jump up from the couch in the Delta lounge I was sitting at in the St. Louis airport, making everyone turn and stare at me, as my pants were now stained with 3-hour-old coffee that I forgot I had rested on my head to test my balance and focus during my Skype interview.

“Check please!” I casually shouted to the nearest Delta lounge liaison. The room bursted with laughter and all the businessmen got back to their business. Anyways, my laptop got busted so I’m finishing up this story on my Sony Clie.

The Tiger King theme park will likely be shut down as it’s a downright illegal concept, and there’s no way any of it’s construction has been approved by anyone, however in a recent press conference Rick Scott did say, “I can’t wait for Dedrick to open up Tiger King World, because I approved everything he wanted, and I own a 90% stake in the company, so everything involved with that will run smoothly, as I will see to it.”

So there may be conflicting stories with what is actually happening. I will not be doing a follow-up on this story. This is all of it. If you want more information, I’m sorry, you’re just plumb out of luck.