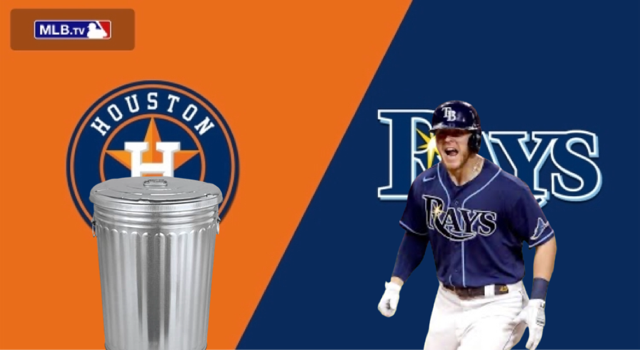 After dispatching the vile New York Yankees 3-2 in the Amercian League Division Series, the next obstacle standing in the way of the Tampa Bay Rays righteous quest for World Series glory is the only professional sports team to benefit from COVID-19, the Houston Astros.

The 7-game series begins with the first pitch at 7:37pm tonight at Petco Park in San Diego.

Following the conclusion of the 2019 season, in which the Astros lost the World Series to the Washington Nationals, it was revealed that Houston had been using an elaborate system of hidden cameras, signals conveyed to hitters by banging on trash cans, spy satellites, covert meetings with foreign agents in parking garages, baseballs ‘juiced’ with live hornets inside of them and other desperately shady tactics to cheat and win games going back as far as at least 2017.

Major League Baseball handed down the most severe punishments in recent baseball history, issuing an official, “Hey! Not cool, guys!” rebuke. A couple of guys were suspended (not fired) and due to COVID, no fans were present at any games to roast the ever-loving shit out of these douchebags.