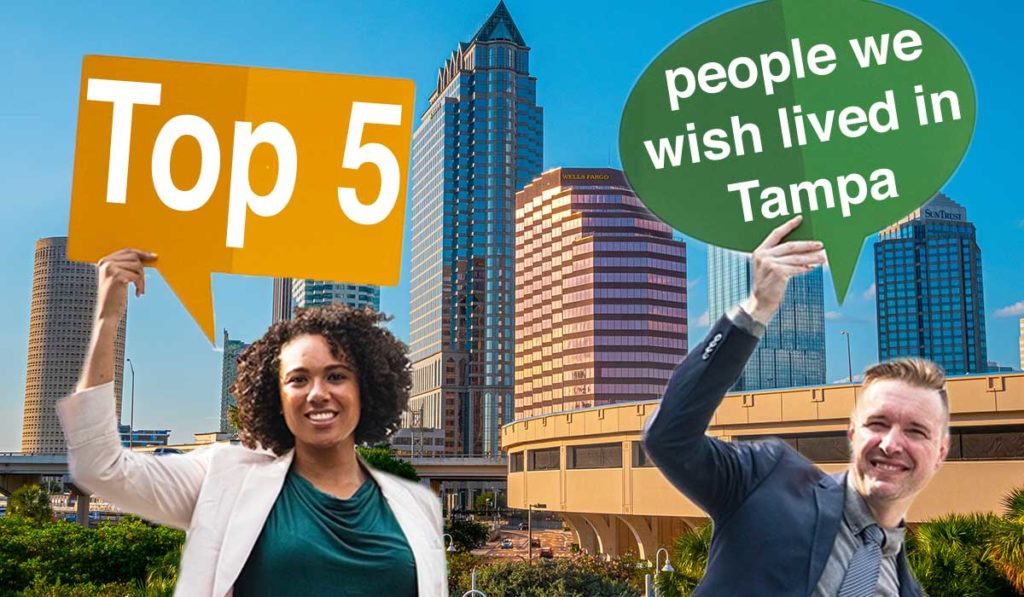 There are millions of people in the Tampa Bay area, but there’s always room for more! These are the top 5 people we wished lived in Tampa:

1. The Cast of the Fast and Furious

I’m gonna be honest folks. I wrote this whole article already, and it was amazing, and one of the best ones ever, but it accidentally got deleted, and I’m really bummed about it, so I got lazy and just made the list like this, because it was too hard to try to recreate the magic I had before. I have the cast of the Fast and Furious at the #1 spot for “people we wish lived in Tampa,” because the original article I had the list starting at #5 going down, arranged us, The Rock, Charlize Theron, Ludacris, Michelle Rodriguez, and Vin Diesel at #1. It was really funny and informative about each of the characters not only in the movie, but in real life. I know my Fast facts, and I’m an avid Fast and Furious fan. So when I wrote a long ode to the series, just to have it erased right in front of my face, it was very painful. But I think that’s kind of what the Fast and the Furious mantra encapsulates.  I’m upset I lost my article written about the Fast and Furious, but in the Fast and Furious, they live their life a quarter mile at a time. They don’t get to look back at the action, (not literally, we do, because it’s a movie, but they can’t) they have to enjoy the action in the moment, so that’s what I’m trying to tell myself. I had fun writing it in the moment, I felt alive. Shining in a literary manner, flexing my Fast and Furious knowledge, breaking down why each of those actors/rappers would have been perfect Tampa residents. I can still remember it. When I lost it, I contemplated writing an article about “a journalist accidentally deleting a very important article,” but it felt too meta and not that funny, kind of how like this is right now. But if Fast and Furious taught me anything, it’s go big or go home, so if I have a gut feeling to create a more abstract, personal article, that’s my prerogative, and I’m going to do it if I want to. The issue was the Notes app was glitching, which is what I write my articles, so I opened up a second note, so I could continue writing the article, because sometimes when the articles get too long, the screen starts shaking for some reason after every word I type, but when I opened up the second article, it still had the entire first part of the story I just wrote, so I was like, “get this outta here,” So I delete it all, not realizing I hadn’t actually created the second note yet, and I was still on the first, and just deleted the article, but I had already written like a good amount for the second note, and no matter how many times I control+Z’d it, I couldn’t bring my original writing back. And I was just finishing up. My hard work had just come to an end, when I learned it was all for nothing. Kind of like an over-the-top extremely dangerous drag race. To commemorate the article that could have been, here’s how far I had gotten in the second note, the conclusion of my long Top 5 people we wish lived in Tampa article:

“Or are we to assume they’re going to fill them in at a later date? Because if that’s the case why not do it at the victory party for the mission they just accomplished, the same party where Dom is dedicating his baby to Brian. It just doesn’t make sense to me, and it makes me sad and upset, because it’s not what any of us wanted. I mean, they did a good enough job I guess trying to move forward from Fast 7 which was absolutely perfect in every way, and especially emotional because it was the last movie with Brian still in it. However for some scenes they generated Paul’s face over his brother’s bodies, with CGI, and that’s a very disturbing sort of concept to have your deceased brothers face digitally projected over yours so you can finish the scenes in the movie he died before finishing. It’s just very morbid. It’s a nice idea to get his family involved, but it seems a little strange to do something like paste his face over the face of his family. But anyways, if Vin Diesel moved to Tampa, then for sure there would be a Tampa scene in an upcoming Fast movie, and maybe he could work out his issues with The Rock so we can peacefully bring Tyrese back into the picture, because Tyrese basically told the studio it’s either me or The Rock, and they were like, ‘is this a joke? Obviously the Rock get the hell out of here.’ So even though John Cena and Keanu Reeves are rumored/confirmed to be in upcoming Fast and Furious movies, there’s no guarantee whether we’ll meet Roman Pearce again in an  upcoming Fast film.”

You know after reading that last part again, maybe it’s for the best the first majority of the article was deleted. For some reason I’m obsessed with those movies. Did you know they win “least racist movie,” every time one is released? They’re inclusive. Look at the gang, Han, Don Omar, Ludacris, the list goes on and on. It’s a diverse cast of friends who have come together for “family.” That’s usually what they say, they’re like, “we’re doing this because we’re family. And family is everything.” Which is a nice rationalization for stealing DVD players from a moving truck. They went from robbing trucks on the highway to ripping the bank vault out of a Brazilian police station. What a progression! Then to make Tokyo Drift a prequel, just because the director likes Sung Kang! There’s 8 of these movies but for some reason we were shown act 6 during the 3rd act. For some reason, we were given a glimpse of the future, then 3 prequels to that moment. Because family. We want to live in a time where more of our family can be with us. And even though one day we have to move on, we can still create stories of fictional drag races in Japan with them.

I’m sorry guys I know you wanted to read about the top 5 people we wish lived in Tampa, but again, I lost that article, and I still haven’t fully processed all of my emotions on the Fast franchise. Because I loved 1-7 then hated 8, for reasons having to do with the way they dealt with Brian, then I really hated even the concept of the Hobbs and Shaw spinoff, because neither of those characters are original Fast cast, and if anything it’s disrespectful that The Rock has hijacked the franchise. It’s not his! He’s great, but he’s not handling the art delicately! He’s cheapening the integrity of the films! The soul of the movies is off! It’s changed! But that’s life right? The world changes and you just have to deal with it the best you can. And I’m sure these are the kind of thoughts Vin Diesel and Tyrese have regarding the franchise.

See now I feel like I’m thinking about it too much again. This feels like Tribute by Tenacious D, I’ve written this whole ode to my article which was an ode to Fast and Furious, but now I feel like I overhyped it and it wasn’t that good, and I probably just think it’s good because I made it, it’s like kids. You think your kid is great, even if it isn’t because it’s yours, and you watch them be bad at soccer for many years, because you love them.
That’s what the Fast and Furious makes me feel. Loved and accepted. Because they’re all outcasts right? They live on the edge of society by their own rules, and they break some laws sometimes, but they have good intentions. I think. What are their intentions? Not to have conventional jobs or lives? I think that’s something we can all strive for. Living on the edge. Lovin’ on the edge, that’s the name of my R&B album.

In conclusion, The Fast and the Furious cast should just move to Tampa, and let me be the new lead. The writer/comedian who gets tangled in the underground world of street racing. To find his family. His true purpose. Racing cars, and drinking Corona. And having Cookouts where people pray to “car Gods.” In the first movie, Jesse says a prayer for new car parts and Letty is like, “yea, praying to the car Gods!” So wild! God, every part of all of those movies is just perfect. “I guess it’s nobody’s car then.” The point is, Brian had fun driving in the movie, even when he lost. And I have fun writing articles, even when they’re bad.