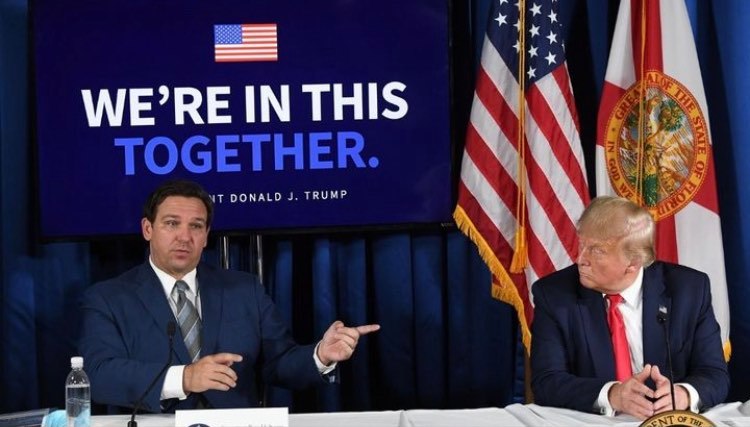 At a recent “We’re In This Together Breakfast & Lunch But Definitely Not Brunch Because That’s Gay” event held at the prestigious Denny’s on Dale Mabry in Tampa, the two were seated next to each other and a somewhat heated exchange took place…

DeSANTIS: Hey Donald, pull my finger!
TRUMP: Donald? That’s Mr. President to you, you bumpkin.
DeSANTIS: (muttering quietly) You mean Mr. One Term Ex-President.
TRUMP: What did you say??
DeSANTIS: Nothing! Nothing! Come on, just pull my finger.
TRUMP: I’m not falling for that… again. And nobody tells me what to do!

“I would have made a fart noise,” admitted DeSantis. “With my mouth. Not an actual fart. That would be immature and crude.”

TRUMP: You would have farted! You would have ripped a real fart! I would know by the smell!
DeSANTIS: The only way you would have smelt it is if you had dealt it! So who would be the farter then?
TRUMP: Watch it. You’re in over your head, you rube!
DeSANTIS: Oh yeah? Well if that’s true, then why… Oh God, what is that smell?
TRUMP: Ha ha ha! Who dealt what now, DeFartis? I did! I did that! And I didn’t need anyone to pull my finger, because I’m a man!
DeSANTIS: Dear Lord, it smells like someone set the carpet in a whorehouse on fire and then put part of it out with cat urine. What did you eat?!?
TRUMP: Your ass! I ate your ass! Wait…
DeSANTIS: Ha ha! Oh man, you ate my ass??
TRUMP: That’s not the way I meant it. You know what I meant. Because if I ate your ass, you’d… Hold on…
DeSANTIS: HA HA HA! Idiot! Ass-eating idiot!

Under normal circumstances, both would be expected to go out and wait in the car – without getting dessert – until the grown-ups finished. However, since Trump and DeSantis wear suits and ties, this is regarded as political discourse.

Veteran political analysts predict that dealings within the Republican party for at least the next two years will continue to be “increasingly embarrassing on a global scale.”