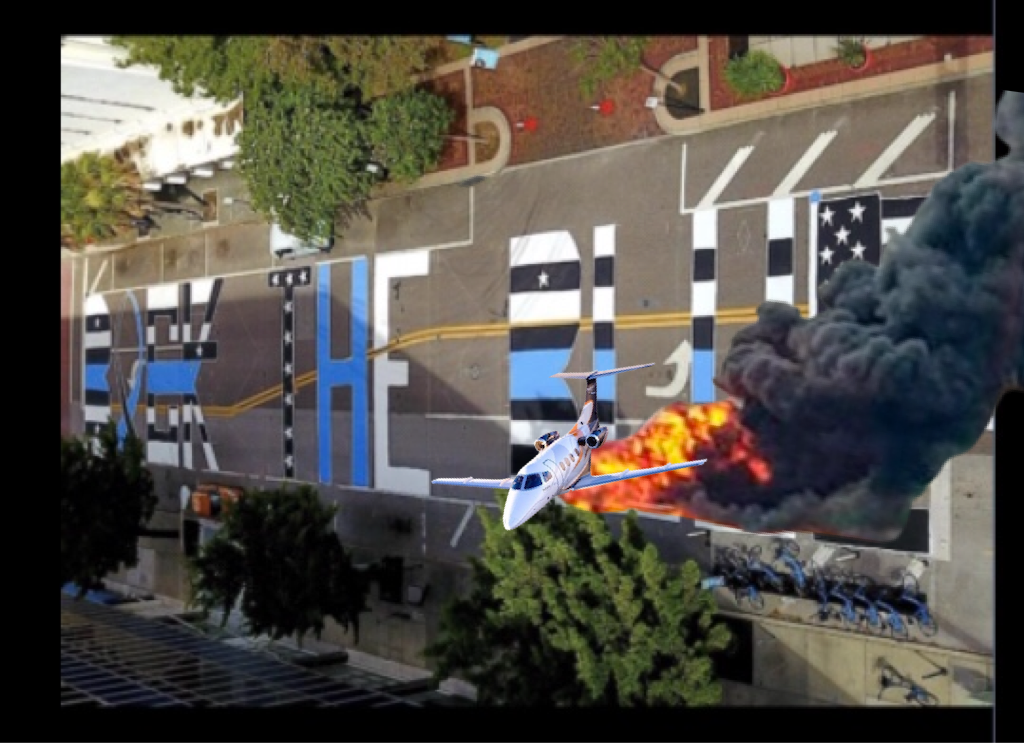 A street mural in downtown Tampa is being cited as the cause of a small passenger plane crash this morning. All aboard survived with relatively minor injuries.

The Embraer Phantom 100, piloted by Scott “Scotty” Alderson with four passengers aboard was bound for landing at Tampa International Airport when the pilot was distracted by something on the ground.

“One of the things I love most about flying is the incredible scenery. I’m also a big fan of public art”, says Alderson. “So when I saw what I thought might be some kind of street mural as we passed over downtown Tampa, I wanted to check it out. But I couldn’t read it.”

The mural, which allegedly says “Back The Blue”, has been interpreted to read “Bock The Bluf”, “Bork The Bork” and “Bkhg The 8$@&” among other things. It’s located on East Madison Street, right outside Tampa Police Headquarters. It was painted, without permission from the city, by volunteers from an organization called “Blue Lives Matter Florida” late Saturday night.

“Yeah, I still can’t read it,” says Alderson. “And I crashed a damn plane on it.”

Flight logs obtained by Tampa News Force indicate the plane changed course at least four times prior to approaching the airport for landing.

“I kept circling back around to try to read it,” says Alderson. “And each time, I’d get a little lower, thinking seeing it up close would help. Nope!”

He went on to explain, “I guess the last time I got way too low because some homeless person in Lykes Gaslight Park threw a handful of excrement that hit the windshield.” Authorities from the Federal Aviation Authority are currently trying to determine the origin of the feces. Early speculation is that it’s human but that has yet to be confirmed. “Could be a very large dog”, said FAA investigator Sharon Throttle. “Either way, it’s only the second biggest pile of shit on this street today,” she said, gesturing to the mural and putting on a pair of mirrored sunglasses.

”I suppose one could say that’s why we crashed but it was my fault we were flying so low, so I take full responsibility,” says Alderson. “Although if actual artists had painted the thing, and not a bunch of triggered, narrow-minded hacks, it probably would have been legible and none of this would have ever happened.”