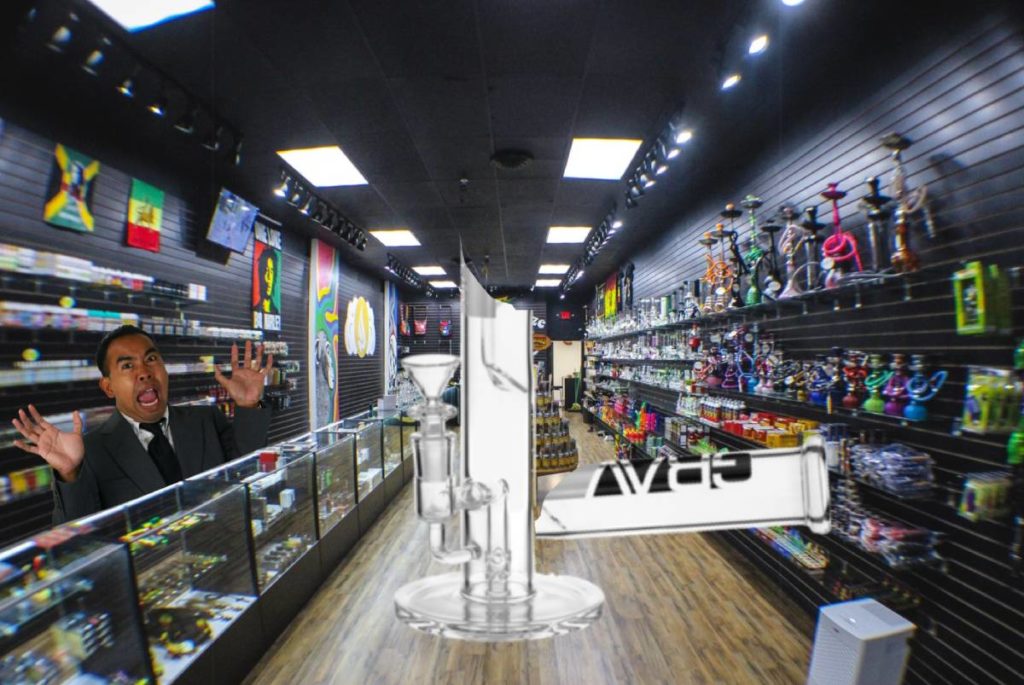 The world’s largest glass water-pipe, or better known “bong”, was destroyed in Tampa, while it was mishandled during a public displaying at a local glass shop.

“We were just admiring the crystals and the chambers when all of a sudden we heard a loud crash and the bottom half of the bong was all in splinters, man,” says Gabe Shannahan, with his brother Bobby. “We wanted to check it out obviously, I mean that’s some major gnarly glassage my dude.” The two brothers high-five after chest-bumping then both pretend they’re holding up a tiny joint to their mouths as they take a fake toke.

“It was just an honor to see this thing,” Bobby says, looking up as he rifles through a 7-11 bag with a loose assortments of chips.

The bong was standing on a pedestal in the center of Bong City a local paraphernalia shop in West Tampa. “We get lots of stuff like this come through, but this is the first time we’ve had an incident,” says Penny Washington, manager of Bong City.

He has a lighter attached to a zip-line on his waist, he pulls it and flicks it on in front of me. “Fire is the ultimate humbler!… We don’t support or encourage marijuana use, all of our products are intended for tobacco only, however, off the record,” he hits the stop button on my recorder, “I smoke weed.” He smiles smirky as if he’s gotten away with something. “I dabble in the devil’s cabbage, and it’s a shame we couldn’t rip out of that giant bong because I would’ve loved to ride that wave if you know what I mean.” His pants fall down, revealing no belt, and they’re much too big.

The bong was originally titled “Euphoria’s Masterpiece,” a name given to it by German engineer/glass-blower, Heeden Von Winkletwink. “It took me 6 sessions of 18 hours to blow that thing,” says Winkletwink. “I mostly do pieces for museums, you know modern art-deco style sculptures, real-deal stuff.” He points at a picture of him in front of the Mona Lisa. “But Euphoria… she was special to me… I never even got to let her rip.” Then he mimes the motion of smoking from a bong.

As for who’s responsible is still up for debate and it’s not sure who will be paying for the bong. The bong had an estimated appraisal of $750,000, featuring Swarovski crystals along the neck, and rare jewels sequenced around the mouth-hole.

Security footage from Bong City hasn’t been much help as it looks like the bong “kind of just falls down” says Bong City security liaison Michael Phillips. “I don’t know who touched it, but maybe it was a ghost! The ghost of weed!” He laughs as his keys jingle. “All I know is, I’m gettin’ high tonight!”