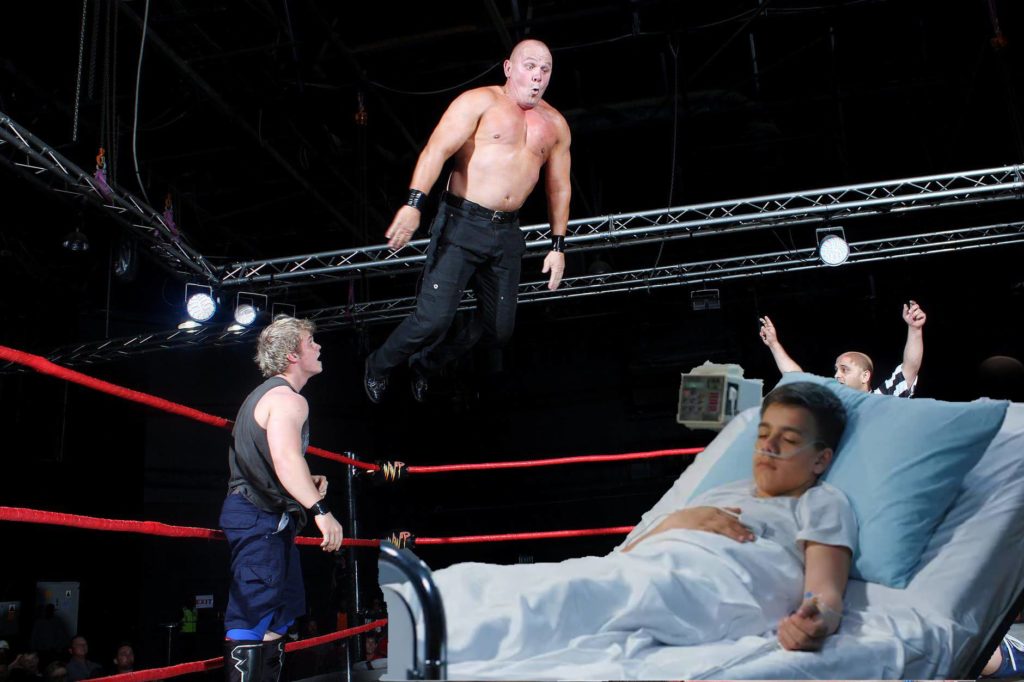 A Brandon youngster named Greggy Petz has passed away immediately after coming out of a coma and finding out about all the WWE events scheduled to take place in Tampa in April.

“Our little Greggy has certainly been through a lot in his short lifetime, but if I’m being totally honest, I’d have to say that this – dying – is by far the worst,” said his mother Petrina. “Although, I guess it’s fitting that the last thing is the worst thing. Hey, glass half full!”

Greggy, aged 15 at the time of his death, had been in a coma after having his head smashed repeatedly with a cinder block during a backyard wrestling match with some friends who are not his friends anymore two and a half years ago.

“We kept praying he’d come back to us and we used his love of wrestling to keep him going,” says his father Pete. The teen’s hospital room was decorated with posters and action figures and other wrestling paraphernalia. “Then the other day, out of nowhere, he just opened his eyes and asked for some water. It was a miracle!”

Petrina says, “Of course, the first thing we did was tell him about all the exciting WWE events taking place locally in a couple of weeks. We wanted him to be happy about successfully fighting off the coma.”

WWE will be hosting WM36 Axxess at the Tampa Bay Convention Center starting on April 2 and the WWE Hall of Fame induction ceremony at Amalie Arena later that night, Smackdown on April 3, NXT TakeOver on April 4 at Amalie Arena, Wrestlemania at Raymond James Stadium on April 5 and Raw back at Amalie Arena on April 6.

“Every event we mentioned, he got more and more excited. He’d respond, ‘oh my God, Oh My God, OH MY GOD!!’ And by the time we mentioned Wrestlemania, he just kind of… well… exploded. Literally. BLOOF!”, says Petrina. “Little bastard came out of a coma and hit puberty at the same time. That’s a lot for anybody to take on”, offered Pete. “At least he died happy,” said Petrina. “REALLY happy”, said Pete. “Of course, you have to imagine he’d have been even happier actually attending at least some of those events, but what are you gonna do?”

The Petz family has one ticket for each of the WWE events listed above that they would like to sell. When I asked if they’d be using the proceeds to pay for expenses or set up a memorial foundation in their son’s memory, they looked at each other, paused, and mumbled, “Yeah, sure, of course, I guess, why not?”